By 김후란
Published : Apr 19, 2011 - 18:20       Updated : Apr 19, 2011 - 18:20
“People who litter public areas suffer from mental and social dysfunction which makes them unable to achieve success in modern societies,” writes journalist Sandra Brasil in one of the most prestigious Brazilian weekly magazines, VEJA. Harsh words to describe a common but unfortunate behavior pattern of people from all over the world.

Littering does not spare any country or culture whether it is Germany, Brazil or South Korea. More than a bad habit, it has become a social disease typical of big cities, where people seem to spend their lives on the go.

Nothing is more practical in this era of rushing than to have a coffee or tea while walking to work. What seems to be very handy turns into a problem once the delicious beverage is finished: how to get rid of the disposable cup? 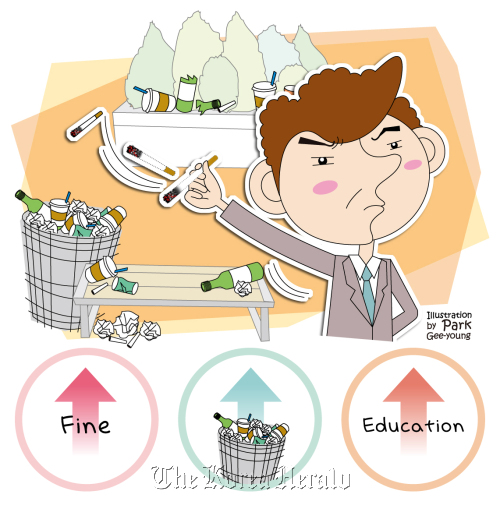 In Seoul, where public dust bins are rare, there are several possibilities.

The disposable cup ― or juice bottle, refreshment can, package or wrapper ― is neatly placed on the wall of a building or house where one passes by or under, or even on, a public bench. If such convenient areas to dispose of the junk are not found, well, then the trash can be delicately placed among the branches of a nice bush or on the ground around those beautiful trees planted along alleys and avenues. Pedestrians not happy with only littering on the roadside turn into car drivers throwing trash out of the windows and even emptying ashtrays while driving. You think I am exaggerating? Sorry to disappoint you, I have seen many drivers doing so along Namsan Park and not only once.

Which reminds me of the way we treat parks. Every now and then there are containers to get rid of our waste but many still seem to think that they are too far apart from each other. Once the refreshing water has been drunk, the empty plastic bottle is just placed along the walking path in the hope that some good soul will eventually collect it and dispose of it.

And what about those dog owners who seem to think that the poop of their lovely best friend is of public interest?

Perhaps this has something to do with the garbage collection system? The fact is that there aren’t many dustbins on the road, which forces people to be creative when disposing of their junk.

Food waste from homes is supposed to be placed in yellow bags which are torn open by stray cats and magpies as soon as the smell makes them realize that there must be some yummy edibles inside. Once there is a yellow bag on the road, it works as a collective sign for others to put all kinds of rubbish around it and in no time there is a huge pile of litter patiently waiting to be collected at some point in time ― a disgusting sight, by all means!

One thing for is sure: The bigger the city, the more anonymous we become and the less we care for each other. Nobody feels responsible for anything, somebody will do the job. We do appreciate private property and take off our shoes when entering our homes but it’s a different story with collectively owned public property. We want to be respected as individuals but forget to respect the rights of the millions of citizens who share the city with us.

I guess our mindset has to change and radically if millions of people want to cohabit in a civilized manner and raise responsible future generations. The keyword appears to be education at all levels. In the seventies, the Brazilian government together with the local media started a massive awareness campaign for a clean country showcasing the dangers ― for health, environment and public safety ― of inappropriate waste disposal by stressing the importance of respecting individual rights as well as common well being.

A campaign, though, will not be enough if the government does not install public dustbins along the roads for people to dispose of their waste. Instead of organizing cleaning drives every now and then, parents and schools could teach children from a young age to dispose of their waste appropriately to avoid clogged gutters which lead to road flooding during the rainy season. And if nothing else works, why not adopt the “pay for throw” policy? Singapore introduced heavy fines for littering and for years it was referred to as the “cleanest city in the world.”

The writer, an interpreter and translator, lives in Seoul. She can be reached at koenig.carolina@gmail.com ― Ed.