In the Bundang-B Constituency where the most fierce battle is expected, Sohn Hak-kyu of the main opposition Democratic Party is putting up a good fight despite the region’s traditional support for the conservative party.

This was his first lead over the GNP candidate since the official by-election campaigns kicked off last Thursday.

In another survey by the Hankyoreh, Sohn won 38.8 percent support, closely chasing Kang who won 43 percent. 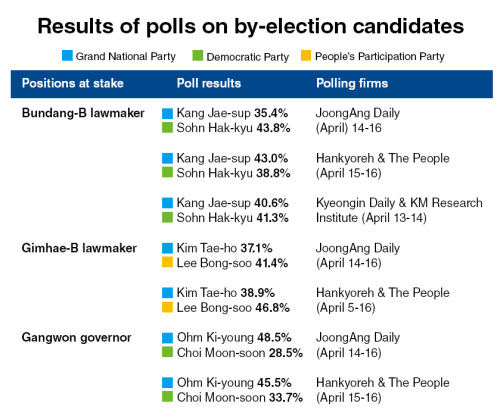 “In the beginning, we considered Sohn’s entry as his personal sacrifice for the party, expecting a hard fight, but we now have a solid chance of winning in Bundang,” said a DP official.

Sparks are also flying in the Gimhae-B constituency in South Gyeonsang Province where former governor Kim Tae-ho of the GNP is competing with Lee Bong-soo of the minority People’s Participation Party.

Gimhae, as the hometown of the late liberal President Roh Moo-hyun, is largely categorized as a pro-opposition region and public surveys so far have borne this out.

According to the JoongAng Daily survey, Lee has the lead over his rival with 41.1 percent to 37.1 percent.

The gap, however, is narrowing by the hour as the former governor expands his influence over local voters.

“Kim’s campaigns and pledges have been relatively quiet, compared to those of the opposition parties,” said an official of his camp.

“He nevertheless has been keeping sincere touch with the people in the local community and such efforts seem to be leading somewhere.”

The discreet pledges of the former governor stand out against the opposition parties’ commotion over unifying their candidate, the official said.

Lee, on the other hand, is continuing his claims of being the political heir of the late liberal president, under the support of Rhyu Si-min, leader of the PPP and closest aide to the deceased Roh.

In Gangwon Province, former broadcasting big shot Ohm Ki-young is holding a lead of 20 percent or more over his senior and rival, Choi Moon-soon of the DP.

Amid these fluctuating responses from the voters, parties are also reorganizing their strategies.

The ruling party, having secured some ground in Gangwon Province, turned its full attention to Bundang, which is largely regarded as the Maginot line in the impending by-elections.

Party leader Ahn Sang-soo and other big names have set out to visit the Kang camp in Bundang in an attempt to win conservative voters’ support.

“Sohn is only using Bundang as a test area before challenging the presidential seat next year,” Ahn said Monday in a meeting of senior lawmakers.

The opposition camp, on the other hand, is focusing on elevating the turnout rate, especially of younger voters in their 20s and 30s.

In this April 27 by-election, regarded as the most intense ever, the turnout rate is expected to be around 40 percent, considerably higher than the usual 35 percent, according to the National Election Commission.