The regulators said the rating was being raised from 5 to 7 ― the highest level on an international scale overseen by the International Atomic Energy Agency. However, there was no sign of any significant change at the tsunami-stricken Fukushima Daiichi nuclear plant.

The new ranking signifies a “major accident” with “wider consequences” than the previous level, according to the Vienna-based IAEA.

“We have upgraded the severity level to 7 as the impact of radiation leaks has been widespread from the air, vegetables, tap water and the ocean,” said Minoru Oogoda of Japan’s Nuclear and Industrial Safety Agency.

NISA officials said one of the factors behind the decision was that the cumulative amount of radioactive particles released into the atmosphere since the incident had reached levels that apply to a Level 7 incident.

The revision was based on cross-checking and assessments of data on leaks of radioactive iodine-131 and cesium-137, said NISA spokesman Hidehiko Nishiyama.

“We have refrained from making announcements until we have reliable data,” Nishiyama said.

“The announcement is being made now because it became possible to look at and check the accumulated data assessed in two different ways,” he said, referring to measurements from NISA and the Nuclear Security Council.

Nishiyama noted that unlike in Chernobyl there have been no explosions of reactor cores at the Fukushima Dai-ichi plant, although there were hydrogen explosions. 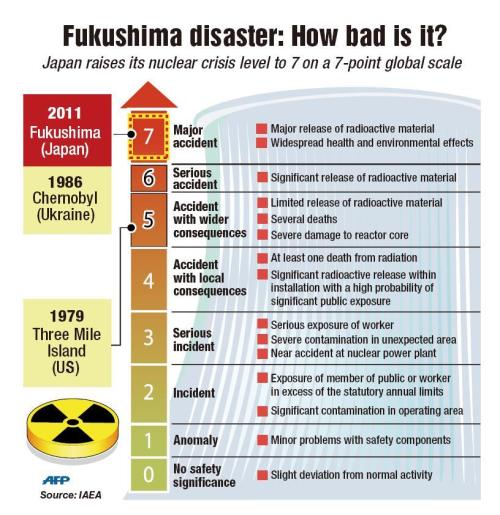 “In that sense, this situation is totally different from Chernobyl,” he said.

He said the amount of radiation leaking from the Fukushima Daiichi nuclear plant was around 10 percent of the Chernobyl accident.

Tokyo Electric Power Co., the operator of the plant, is still estimating the total amount of radioactive material that might be released by the accident, said company spokesman Junichi Matsumoto.

The company, under fire for its handling of the accident and its disaster preparedness before the March 11 earthquake and tsunami, issued yet another apology Tuesday.

“We humbly accept this. We deeply apologize for causing tremendous trouble to those who live near the nuclear complex and people in the prefecture,” TEPCO spokesman Naoki Tsunoda said.

In Chernobyl, in the Ukraine, a reactor exploded on April 26, 1986, spewing a cloud of radiation over much of the Northern Hemisphere. A zone about 30 kilometers around the plant was declared uninhabitable, although some plant workers still live there for short periods and a few hundred other people have returned despite government encouragement to stay away.

It said the fire in a box containing batteries in a building near the No. 4 reactor was discovered at about 6:38 a.m. Tuesday and was put out seven minutes later.

It wasn’t clear whether the fire was related to a magnitude-6.3 earthquake that shook the Tokyo area Tuesday morning. The cause of the fire is being investigated.

“The fire was extinguished immediately. It has no impact on Unit 4’s cooling operations for the spent fuel rods,” said TEPCO spokesman Naoki Tsunoda.

The plant was damaged in a massive tsunami March 11 that knocked out cooling systems and backup diesel generators, leading to explosions at three reactors and a fire at a fourth that was undergoing regular maintenance and was empty of fuel.

The magnitude-9.0 earthquake that caused the tsunami immediately stopped the three reactors, but overheated cores and a lack of cooling functions led to further damage.

Engineers have been able to pump water into the damaged reactors to cool them down, but leaks have resulted in the pooling of tons of contaminated, radioactive water that has prevented workers from conducting further repairs.

Aftershocks on Monday briefly cut power to backup pumps, halting the injection of cooling water for about 50 minutes before power was restored.

A month after the disaster, more than 145,000 people are still living in shelters, and the government on Monday added five communities to a list of places people should leave to avoid long-term radiation exposure.

A 20-kilometer radius has already been cleared around the plant.

The disaster is believed to have killed more than 25,000 people, but many of those bodies were swept out to sea and more than half of those feared dead are still listed as missing.

In Iwaki, a city close to the epicenter of a magnitude-7.0 temblor Monday, a landslide brought down three houses, trapping up to seven people. Four were rescued alive, but one of those ― a 16-year-old girl ― died at the hospital, a police official said. He would not give his name, citing policy.

Around 210,000 people have no running water and, following Monday’s aftershocks, more than 240,000 people are without electricity.

In all, nearly 190,000 people have fled their homes, the vast majority of whom are living in shelters, according to the national disaster agency. About 85,000 are from the cleared zone around the nuclear plant; their homes may be intact, but it’s not known when they’ll be able to return to them.