The money is believed to be part of a slush fund raised by running an illegal gambling website, the officials said, adding the total amount of the illegal fund reached 11 billion won.

According to the investigators, the 53-year-old man surnamed Lee received a total of 11 billion won from his brother-in-law between April and May 2009 through a third party. Meanwhile, his brother-in-law was imprisoned for operating an online casino with a server based in Hong Kong between 2008 and 2009. He is due to be released next month after serving his 18 month-term. 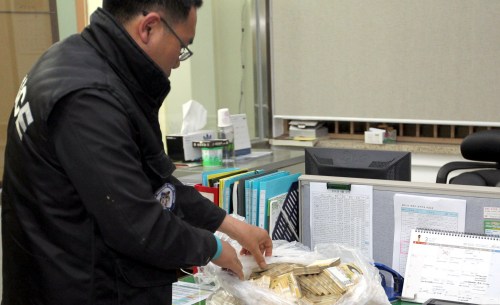 Lee has reportedly changed the money into 50,000 won notes and hid it different spots including his apartment, his son’s car-rental office and two garlic fields. He also misappropriated some of it.

As the day of his brother-in-law’s release neared, he framed it on an excavator driver, who helped him cultivate the farmland earlier this year. The driver has reportedly told the police, “Lee kept interrogating me for stealing 700 million won from 1.7 billion won he had buried on the site. I haven’t seen a thing there.”

The police found a plastic container at Lee’s farm with 300 million won in it. Investigators have managed to find a total of 2.4 billion won around his house and offices.

The police raided other properties he owned to discover a total of 8.6 billion won buried and have sought Lee’s arrest.

“We are studying where Lee and his relative made the money. We are also searching for additional funds,” a police officer said.

Some observers said the accumulation of slush funds has become easier since the 50,000 won-note was adopted in 2009.

“Insiders have constantly raised possibilities of such irregularities from the beginning of its adoption. People wouldn’t really consider burying 8 billion won in 10,000 won notes,” an observer said.