Over the last three months, however, Jerry noticed it was increasingly difficult to achieve the same degree of high performance during his routine physical training exercises.

More recently, he felt as though “his heart was beating out of his chest” after a strenuous workout, he suffered from fatigue all the time and he was sweating profusely day and night. No matter how much he ate, he always felt hungry, and he lost 5 kg. He battled insomnia every night.

One day, he was shocked to discover that he could not recognize his own writing and when he looked down at his hands he noticed they were both trembling. He knew something was wrong.

The doctor ran some tests and told Jerry he had hyperthyroidism, and referred him to an endocrinologist.

Jerry and his wife were nervous and especially concerned about the prognosis because a diagnosis of hyperthyroidism is incompatible with a career as a pilot.

The endocrinologist did a physical examination concentrating mostly on Jerry’s eyes, neck, heart, abdomen and nerves. 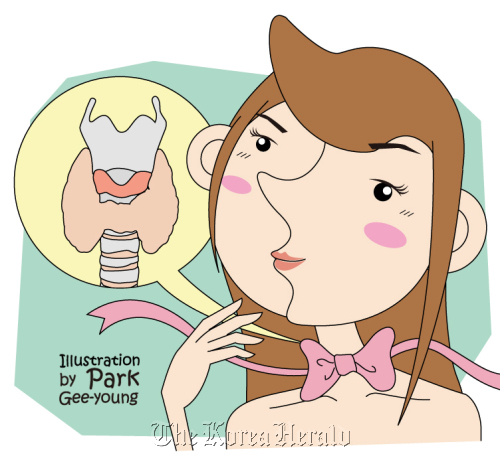 After more tests, Jerry was diagnosed with Grave’s Disease. He was told that most patients are first treated with a trial of medication for about a year before considering the second line of therapy, usually radioactive iodine, but Jerry needed a quick resolution for his over-active thyroid due to an upcoming medical review board which would determine his fitness to fly.

Therefore, he was started on a short course of anti-thyroid medication and a “beta-blocker,” a medicine to control his fast heart rate. Later, radioactive iodine was administered.

Once the blood work indicated that Jerry’s thyroid gland was underactive, he was started on a low dose of replacement thyroid hormone medication. He was then transferred from Korea back to his home state of Alabama to continue his career as a fighter pilot.

Q: What is the thyroid gland and what does it do?

A: The thyroid gland is butterfly-shaped and located in the front of the neck, below the voice box. It secretes thyroid hormone which has many important functions in the body. Its central role is controlling our basal metabolic rate, in other words, the tempo of the body’s cells and organs.

Q: What is Grave’s disease?

A: Grave’s disease is the most common cause of hyperthyroidism, or “overactive thyroid.” It is an autoimmune condition in which the body produces “antibodies” which stimulate the thyroid gland to produce more thyroid hormone than needed. The symptoms can be: hair loss, headache, fatigue, irritability, aggressive behavior, weight loss (rarely weight gain), increased appetite, swelling around the eyes, protrusion of the eye(s), double vision, enlargement of the thyroid, fatigue, palpitations, decreased exercise tolerance, abdominal discomfort, frequent bowel movements with or without diarrhea, tremors, thickening of the skin (mostly over the shins), insomnia, difficulty concentrating, feeling warm, and sweating.

It tends to affect adults between 20 and 40 years old and is more common in women than men. In its most severe form, “thyroid storm,” or “thyrotoxic crisis,” the consequences of extreme fever, fast heart rate, delirium, seizures and liver damage can result in death.

Q: How is Grave’s disease diagnosed?

A: Grave’s disease can be diagnosed with blood tests to look specifically for thyroid autoantibodies and a radionuclide thyroid scan.

Q: How is Grave’s disease treated?

Q. What are the results of treatment?

A: In approximately half of all patients, Grave’s disease subsides and never returns after 18-24 months of treatment. In the remaining half, it can return and treatment options are to resume medical therapy or to proceed with radioactive iodine treatment. Pregnant and breastfeeding women cannot receive this but it is otherwise safe. Surgical removal of part of the thyroid gland cures hyperthyroidism in nearly all cases. In both cases, hypothyroidism is a possibility after treatment, in which case daily replacement thyroid hormone medication can be taken.

Q: How can I learn more about the thyroid gland and thyroid diseases?

A: The American Thyroid Association (www.thyroid.org/patients/) has a wealth of information on all aspects of thyroid diseases.
By Alice Hyun-Kyung Tan, M.D.