A Masters with endless possibilities


AUGUSTA, Georgia (AP) ― On the far end of the course Wednesday, near the only palm tree at Augusta National, Lee Westwood rolled long putts across the fourth green as he practiced alone on a quiet afternoon before the Masters.

Spotting two familiar faces in the crowd, he looked over with a grin and said, “Lost? Bar closed?

Through the pines and dogwoods, down a steep slope toward the 16th green, players stopped on the edge of the 16th green to the fans’ delight and tried skipping shots across the pond and onto the green. On what might be the only day of booing, Graeme McDowell got an earful when his shot sank before it got halfway across the water.

It sure didn’t feel like the day before the first major of the year. 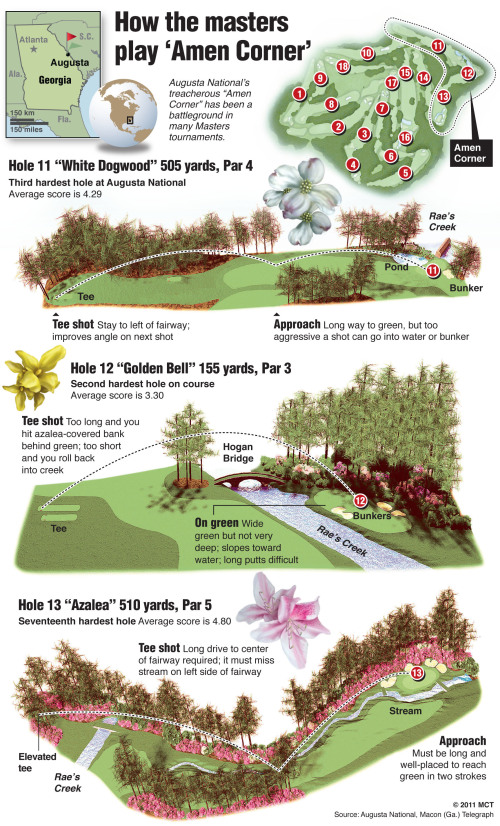 But then, Augusta National has a way of putting players at ease with its sheer beauty, when the Masters is more about azaleas and jasmine and enjoying a special place than trying to win a green jacket.

That figures to change on Thursday.

“The Masters has a fear factor, and that’s the best thing about this golf course,” three-time champion Nick Faldo said Wednesday.

Phil Mickelson will try to join some exclusive clubs when he tees off in the opening round as the clear favorite in the first major of the year. Never has Lefty had so much at stake at one tournament.

He can go to No. 1 in the world for the first time in his career. He can join Jack Nicklaus, Tiger Woods and Arnold Palmer as the only players with at least four green jackets. And he can become only the fourth player to win the Masters in consecutive years.

To show how much he’s ready, Mickelson poured in 18 birdies last weekend to win the Houston Open. And when he arrived at the Masters, one of the first visits he made was to a back specialist.

“This week is the one week where I swing the absolute hardest,” Mickelson said. “I’ve been working out for it. I saw a back specialist just to make sure that my back hangs in there. It feels terrific, but I’ve been working on it for some time to make sure it’s strong enough to withstand the rotational speed that I’m going to be trying to apply this week. Because it’s a big advantage if you can move it out there.”

Woods, no longer the betting favorite at Augusta for the first time since 1999, is more concerned with a shorter club ― his putter. It has kept him from winning the Masters twice in the last four years, and kept him from contending since his return to golf a year ago.

Even so, they remain the two dominant forces.

“The Masters will always start with Tiger and Phil,” said Robert Allenby, who will play with Woods the first two rounds. “Their record here and the way they play Augusta make them the two to beat.”