Although much is being said about reclusive North Korea’s likely next leader, few are familiar with Kim Jong-un’s personality and background, or how starving people in the North really feel about the third-generation power succession.

“One cannot understand North Korea properly without understanding its dictatorial and hereditary power transition systems,” Ha told The Korea Herald. “In this sense, the book was designed to inform more people about heir apparent Kim Jong-un as well as overall North Korea.”

Ha, who has been running Open Radio for North Korea, a Seoul-based radio station that broadcasts daily to the North, since 2005, said he achieved most of the contents from sources and elites in North Korea.

Comprised of five big chapters and 24 smaller sections, “Cartoon Kim Jong-un” contains little-known information about Kim Jong-un as a youngster, and how and why his two elder brothers failed to win their father’s approval to rule the impoverished regime.

Quoting Kenji Fujimoto, the pen name of incumbent leader Kim Jong-il’s Japanese sushi chef from 1988 to 2001, as well as other sources, the book explains Jong-un was favored over his brothers for his active and manly character.

Eldest son Jong-nam is considered “a potential threat” by the heir apparent while he is on generally good terms with second son Jong-chol because they share the same mother, the book says, describing Jong-chol as a “peacemaker with a sensitive personality.” Jong-nam, on the other hand, has long eyed reform and open-door policies to solve food shortages and overall poverty issues in his country, views that led to bad relations with his father as well as his younger sibling, the successor, according to the book.

The book also touches on more sensitive subjects such as North Korea’s torpedoing of a South Korean warship, bombarding of a border island and the DDoS (distributed denial of service) attack by hackers, concluding all of them were projects designed by Pyongyang’s incoming leader.

Jong-un, who is said to be no more than 27 years of age, was first officially announced as successor last year, indicating the growing urgency to transfer power from the ailing dictator Kim Jong-il.

The elder Kim, 69, apparently suffered a stroke in 2008 and has not recovered completely with observers saying he will not live for more than five years.

Calling Kim Jong-un “Internet-savvy and well-acquainted with weapons,” the book also claims there is high possibility he will lead a third atomic test to have his country internationally recognized as a nuclear power by 2012. 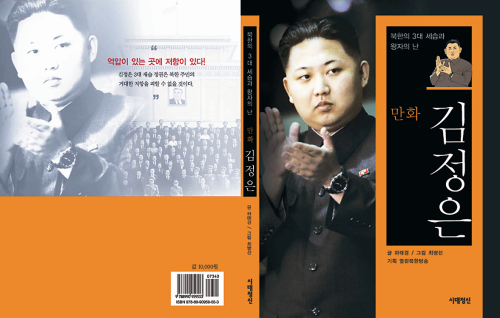 Regional powers have been escalating concerns about Pyongyang conducting another nuclear test after the communist state unveiled a sophisticated uranium enrichment facility to outside experts last year.

Uranium, if highly enriched, can be used to make atomic bombs, providing the North with a second way of building weapons after its existing plutonium-based program, upon which it conducted two previous nuclear tests in 2005 and 2009.

The author also criticizes leftist civic and political groups in Seoul which have defended the North’s hereditary succession and continue to suspect their government’s conclusion that Pyongyang torpedoed the Cheonan.

“I consider a book as a record of history that must contain the absolute truth to help the future generation set up proper views,” Ha said. “So I considered it necessary to explain how people here had different views about even the most absurd, anachronistic happenings taking place in North Korea.”

Also introducing the disastrous currency reforms and extravagant lifestyles of the Kims, the book unveils to readers the deepening food shortages and ensuing negative sentiments of the general public in North Korea.

Although they are afraid to bad-mouth their leader or the heir apparent out loud, many North Koreans secretly call them the “fat pig and the fat bear,” and are growing more familiar with South Korean TV programs and goods that flow in via China, it says.

Author of the book Ha said “there is little chance” of the third-generation succession taking place smoothly.

“Compared to the succession of Kim Jong-il, power transfer to Kim Jong-un is taking place in a much more unstable manner,” he said. “While his father was trained for more than 20 years before taking power and was in his 40s, Kim Jong-un has not been trained properly at all.”

Should the incumbent Kim die within five years, his son will “have a hard time settling in as a proper leader,” Ha said.

“We will be seeing a fierce struggle of power among different factions in the North.”

The North Korean parliament is scheduled to hold a meeting Thursday, during which Kim Jong-un is largely expected to be further promoted to cement his position within Pyongyang’s defense commission.

Jong-un was made a four-star general in September last year and appointed as a vice-chairman of the party’s Central Military Commission, which oversees the 1.2 million-strong armed forces.

Ha said he hoped his comic book will be published in various other languages, including English.

“I am hoping the book will play a role in informing people around the world about the succession problem in North Korea,” he said.