After finishing nine holes of practice at Augusta National Golf Club in Georgia, Yang Yong-eun said he is seeking a “top-10” finish.

“The wind was blowing hard today and I was just checking out the course,” said Yang, the winner of the 2009 PGA Championship.

He is the first Asian golfer to win one of the four major titles in men’s golf.

“Greens are fast here, and I will concentrate on my short game,” Yang added. “Over the next two days of practice rounds, I will try to put myself in top form and finish inside the top 10.”

This is the fourth Masters for Yang, who tied for eighth in 2010. So far this season, the 39-year-old has had three top-10 finishes in seven tournaments, and he’s ranked 33rd in the world.

Choi Kyung-ju, better known as K.J. Choi on the PGA Tour, said he wants to return the love of his fans with another good finish at Augusta.

“I am getting more comfortable with my new swing and I am in good form,” Choi said. 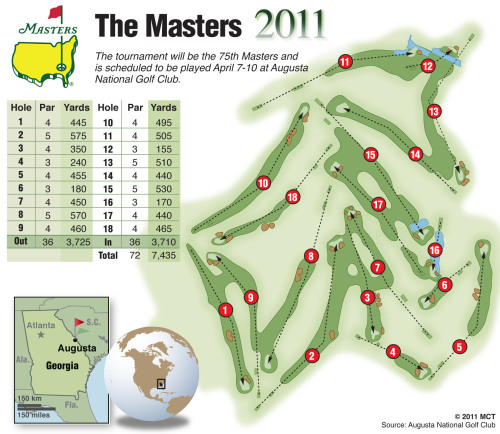 The 40-year-old is playing in his ninth straight Masters. He was third in 2004 ― the highest finish by a South Korean at the Masters ― and tied for fourth a year ago while playing all four rounds with Tiger Woods.

Woods generated much hoopla at last year’s Masters, since it was his first tournament of 2010 after dealing with his extramarital affair scandal over the winter.

Choi too has worked hard on his short game. And to ensure more accurate second shots on long par-4s and par-5s here, Choi has ditched his long irons and picked up a “hybrid” club, a blend of a fairway wood and a long iron that offers the high trajectory of a wood and the distance of an iron.

In 2011, Choi has played in eight tournaments, with two top-10 showings. But one of those two came last weekend at the Arnold Palmer Invitational.

“The course looks to be in pretty much the same shape as last year,” Choi said of Augusta National. “Greens are fast and I’d need a good short game to put up low scores.”

Choi and Yang are among four South Koreans in the field, with Kim Kyung-tae and Jeong Yeon-jin being the others. There are also Korean-Americans Anthony Kim, Kevin Na, David Chung and Lion Kim.

Kim Kyung-tae was the money winner on the Japanese PGA Tour in 2010. He said his goal at his first Masters is “to make the cut.”