Korean telecom carriers are engaged in a high-stake competition to win a new wireless broadband spectrum which the state media regulator Korea Communications Commission is to put on auction this year.

Auctioning of the 2.1 gigahertz radio spectrum was part of the revised radio regulation law passed by the National Assembly in June last year, which took effect in January.

However, the five KCC commissioners, who were appointed in late March, first have to lay out the rules of the auction before releasing the spectrum for sale in the market.

The license to use the spectrum bands for high bandwidth will be given for 10 years, considering that technology transforms rapidly. The law states that it could be licensed for up to 20 years.

If the government carries out the auction, it would be the first attempt to move away from the method of the so-called “beauty contest,” where the government imposes the criteria to decide which operator gets the right for spectrum use.

“The biggest reason for introducing the auction system here is to pick the firm which could most efficiently use the radio spectrum depending on market valuation,” said Kim Jeong-sam, director at the spectrum policy division at KCC.

“We also plan to enhance transparency and have the government take back the revenue of the market-evaluated wireless spectrum.”

Taking many factors into consideration, such as the competition environment and the impact on the market, the commission will design the auction ― including whether to divide the 20 megahertz band in half ― as early as the first half of this year, said Kim. 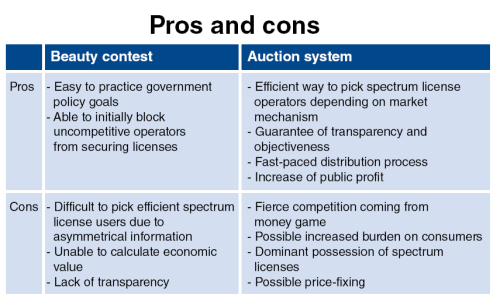 What the country’s three mobile carriers ― SK Telecom, KT Corp. and LG Uplus ― are keeping a close watch on is the 20 megahertz bandwidth of the 2.1 gigahertz range, which could be used for 3G communication service as well as the Long Term Evolution technology.

The bandwidth was a wireless spectrum returned by LG Uplus earlier in 2006, a decision which has now prevented LG Uplus from providing 3G services.

At the moment, however, it is not only LG Uplus expressing strong interest in getting the bandwidth, but also its other two rivals SKT and KT. They claim that the wireless spectrum is needed to deal with the fast-increasing wireless data usage figure, mostly due to smartphone adoption, and for better service.

According to the Korea Communications Agency, the portion of smartphones is likely to take up 40 percent of the global mobile market in 2013. A total of 178 units of million smartphones were distributed last year, with the number expected to rise to 640 million by 2013.

The number of smartphone owners in Korea also recently topped 10 million. With the escalating figure, it is most likely that operators will be coming in short of the wireless frequency band that is required to provide related communications services.

“It may seem as if we have the most frequency band compared to other players, but we need more to meet the needs of our registered customers,” said an SKT official, adding that it now has 9.3 million feature phone (2G) users who will soon make the switch to 3G phones.

Last year, SKT recorded a market share of 50.6 percent, followed by KT and LG Uplus with 31.6 percent and 17.8 percent, respectively.

KT, the No.2 industrial player, also insists that the firm needs the 3G spectrum because it has a smaller range of bandwidth compared to SKT although the two have similar numbers of smartphone owners. SKT has up to 60 megahertz band, while KT has 40 megahertz and the number of 3G mobile users between the two has a difference of 800,000.

For LG Uplus, it is a matter of survival in the upcoming era of smart devices.

“We’re at a disadvantage in the smartphone market,” said an official at LG Uplus. “We’re planning to set up LTE networks with the to-be-auctioned spectrum and if we’re unable to secure it, we will evidently run into a problem.”

He also said that the mobile carrier was unable to deal with the rising wireless data traffic with the current 2G spectrum.

“That’s why we say we’re desperate,” he said.

Seol Seong-ho, researcher at the Electronics and Telecommunications Research Institute, said that adopting wireless frequency band auction is moving in the right direction even if it is somewhat late compared to other countries.

“Some important factors to consider in the introduction phase are selection of rules in auctioning, appropriate reserve price and how to tackle the side effects,” Seol said.

Since the auctioning method has already been selected by many nations overseas, the government is studying the cases of other countries to benchmark the appropriate measures, according to Kim of KCC.

Auctioning spectrum rights were first introduced by the New Zealand government in 1990, followed by countries such as the U.S., India, Australia and the U.K.

In the U.S. spectrum auctions, some spectrum licenses are set aside for small businesses like minority-owned firms, women-owned firms and rural telecom companies.

This indicates that the government could guard monopolization by imposing rules to limit the amount of licensable spectrum, partly designed to create a more competitive telecommunications market.

India, on the other hand, introduced auctioning to lower entry barriers for new players, encouraging them to participate in offering telecommunications services.

“The importance of the flexible use of wireless spectrum is growing for most countries so that it could lead to the development of new services and technologies,” said Lee Seung-hoon, a research fellow at the KCA.

“The licensing process for wireless frequency bands is likely to improve with the introduction of auctioning, ultimately creating the ground to manage radio waves according to practical needs of the market,” said Lee.