Japan Airlines focuses on tie-ups as it exits court protection

JAL has scaled back its global network, chopping 49 routes, including Sao Paulo, Amsterdam and Milan, and grounding the last remnants of what was the world’s largest Boeing Co. 747 fleet as it cuts 103 planes. The Tokyo-based airline, which holds a regular press briefing on Monday, has also shed about a third of its workforce since entering court administration in January 2010 following three losses in four years.

“JAL has to be far more open-minded about its future than being a standalone airline,” said Mike Newman, head of sales at Macquarie Capital Securities (Japan) Ltd. “It all comes down to sustainability of earnings.”

JAL has offset fleet cuts by boosting cooperation with partners in the Oneworld grouping, including a venture with American Airlines that is due to start on April 1 and increased codesharing with Hong Kong-based Cathay Pacific Airways Ltd. The carrier’s reduced role has also seen it shun the new 747-8 and Airbus SAS’s A380 superjumbo in favor of smaller planes including 35 on-order 787 Dreamliners. 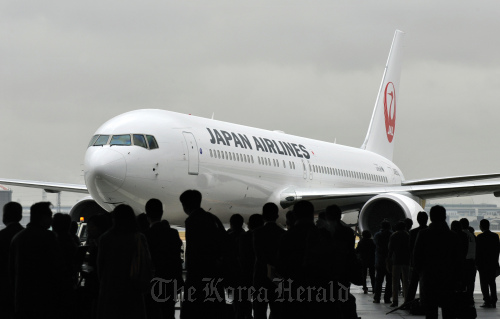 “I don’t think it will be growing back to where it was,” said Peter Kenworthy, a project director of aviation at Mott MacDonald Group Ltd. “It will probably be looking to increase capacity through its alliances.”

The airline expects to complete its restructuring this month as planned, Sze Hunn Yap, a spokeswoman, said on March 25, without elaboration. Chairman Kazuo Inamori and President Masaru Onishi will attend Monday’s press briefing, according to an emailed invite.

JAL’s exit from court administration coincides with a travel plunge following a magnitude-9 earthquake and tsunami on March 11, which left more than 27,000 dead and missing, according to the National Police Agency. The temblor also crippled a nuclear-power plant north of Tokyo, causing power shortages and concerns about radiation leaks.