Korea’s restless modern history will unfold at Leeum, Samsung Museum of Art in Hannam-dong, central Seoul, in the form of paintings, photographs, installations and media works.

The exhibition “Korean Rhapsody: A Montage of History and Memory,” which opens on Thursday, displays 80 historical documents and artworks that reflect crucial moments of Korea’s painful but dynamic past.

“The artworks are displayed not in a chronological order but in a more stereoscopic way. We hope this exhibition will be a chance for the older generation to look at the past and find hope; and for the younger generation to understand our history and get familiar with it,” said Hong Ra-young, the museum’s deputy director at a press conference on Monday.

While staying within the theme, the exhibits are of very high quality, created by renowned local and foreign artists. Only about 20 percent of the exhibits are from the museum’s collection. Lee June, vice-director and curator of the exhibition, spent a year getting loans of the artworks from other museums and collectors.

The first section, which follows Korea’s history from the late 1800s up until the end of Japanese colonial rule, is found in the museum’s Black Box, a separate exhibition area located on the first floor.

It starts with Dutch artist Hurbert Vos’ serene landscape painting of Seoul, which he made during his trip around Asia and Hawaii in 1898-1899. Next to that hangs another view of Seoul, of Gyeongbokgung to be more precise, which appears a bit tense and rigid compared to the first. The 1915 painting is by Korean artist Ahn Joong-sik. Between the years when the two works were painted, Korea was forced to sign the Japan-Korea Annexation Treaty in 1910.

Suh Yong-sun’s 2004 painting “Donghak Peasant Movement” and Park Saeng-kwang’s 1983 painting “The Last Empress Myungsung,” are displayed in the same block. The two paintings are very intense, using lots of red and black to portray the grief and chagrin Koreans had to suffer during Japan’s colonial period.

“Not many artworks are left from the 1930s. So we included Suh Yong-sun and Park Saeng-kwang’s paintings in the section, hoping to give a chance to see how artists from the later generation interpreted the situations in the past,” said Lee.

A room-in-room section showcases Japanese “ukiyoe,” or woodblock prints, and photos of the royal family of the Joseon Dynasty.

“The prints show images of Joseon as seen by Japanese artists of the time. In the prints, Koreans appear to be primitive and pre-modern. The royal family appears to be a bit awkward in the photos as well, because they were taken by the Japanese,” said Lee.

Leading with Lee Que-de’s 1948 painting “Liberation Notice,” which expresses Koreans’ emotional burst after liberation is announced in 1945, the section displays artworks that depict the Korean War and post-war trauma.

Photographer Koo Bohn-chang displays three photos in a row ― “Park Weayeon, Age 101, She Lost Her Son during Korean War,” “A Letter to Mother,” and “A Steel Helmet.” No additional words are needed to understand what the old woman had to go through or where her son had gone and died. 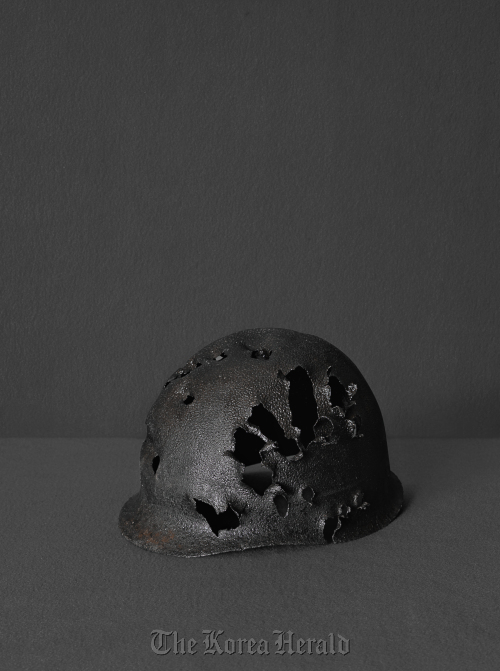 "A Steel Helmet" (Leeum, Samsung Museum of Art)
Alongside more photos that show the nation’s development of buildings going up and new families being formed, three close-up photos of typical Korean “ajumma,” or middle-aged women, catch the eyes.

“No matter what, we have to admit that the power of ‘ajumma’ was one of the biggest driving forces behind Korea’s development,” said Lee.