Every wing of the Self Defense Forces was thrown into frantic service, with hundreds of ships, aircraft and vehicles headed to the Pacific coast area where more than 2,000 people were feared dead and entire neighborhoods had vanished. 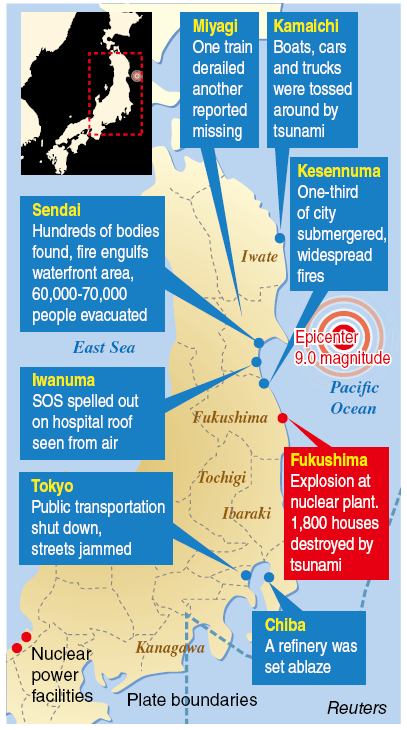 International search and rescue teams also rushed to the devastated country, some fresh from work in quake-hit New Zealand ― including a 63-strong Japanese team that spent two weeks helping after the 6.3-magnitude Christchurch quake.

As emergency staff in Japan dug through rubble and plucked survivors off the roofs of submerged houses, Prime Minister Naoto Kan warned that day one after the catastrophe was a crucial window for survivors.

“I realized the huge extent of the tsunami damage,” the center-left premier said after taking a helicopter tour of the apocalyptic scenes in the northeast before meeting his cabinet ministers for an emergency meeting in Tokyo.

“What used to be residential areas were mostly swept away in many coastal areas and fires are still blazing there,” he told them.

The United States, with almost 50,000 troops stationed in Japan, ordered a flotilla including two aircraft carriers to the region to provide aid ― just one of scores of nations that have offered help since Friday’s monster quake.
U.S. forces on Friday helped Japan rapidly react by delivering a cooling agent to a nuclear plant where malfunctions threatened a dangerous meltdown.

In the utter bleakness on the east coast of Japan’s main Honshu island, where at least 3,600 houses were destroyed by the 9.0-magnitude quake, there were some rays of hope amid the carnage of smashed towns and shattered lives.

Army helicopters airlifted people off the roof of an elementary school in Watari, Miyagi prefecture, and naval and coastguard choppers did the same to rescue 81 people from a ship that had been hurled out to sea by the tsunami.

But for every piece of good news, there were more reminders of nature’s cruelty against this seismically unstable nation ― including the latest of a series of strong aftershocks in the morning, measuring a hefty 6.8.

In large coastal areas, entire neighborhoods were destroyed, with unknown numbers of victims buried in the rubble of their homes or lost to the sea, where cars, shipping containers, debris and entire houses were afloat.

The coastal city of Rikuzentakata in Iwate prefecture was almost completely destroyed and submerged, said the Fire and Disaster Management Agency.

Japan’s military started its mass deployment Friday, when it dispatched 300 planes and an armada of 20 naval destroyers and other ships, while some 25 air force jets flew reconnaissance missions over the vast disaster zone.

The Tokyo and Osaka police forces and the health ministry also all quickly dispatched medical and rescue teams.

Among the international help pledged, a team from South Korea, with five rescue personnel and two sniffer dogs, jetted in.

Japan said it had been offered help by scores of governments ― among them China, with whom Tokyo has sometimes awkward relations.

The United States, which occupied Japan after World War II and is the country’s main security ally, has many of its forces stationed on the southern island of Okinawa, far from the quake zone.

Two aircraft carriers were en route to the disaster zone ― the USS George Washington, which is based near Tokyo, and the USS Ronald Reagan, which was on its way to South Korea for exercises and has been redirected.