Next USFK chief in Seoul for consultations on N. Korean issues 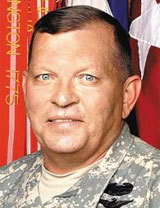 A new commander for U.S. troops in South Korea is on a two-day visit to Seoul for consultations with military leaders here on North Korean issues, officials said Tuesday.

"Gen. Thurman visited Seoul as chief of Army Forces Command and his visit was scheduled long before his nomination," the official said on the condition of anonymity.

Thurman will take the helm of the USFK in June and oversee defense of South Korea at a turbulent time in which both Seoul and Washington remain vigilant against possible North Korean attacks on the South this year.

The jamming signals were believed to be sent from the North's military and might have been designed to disrupt the South Korean-U.S. joint military drills, according to officials.

Also last week, some 40 Web sites in Seoul came under attack by a malicious computer virus, including the official site of the presidential office Cheong Wa Dae. No serious damage has been reported and it was not immediately known who was behind the attack.

However, the South's military raised its alert status on cyber warfare readiness, called "Infocon," by a notch to the fourth-highest level, in response to the latest cyberattack, military officials said.