Kim Ji-young was dumbfounded to find out that she had not used up all of her mobile text messages when she checked her monthly plan last month.

When asked what kept her from sending text messages from her newly-purchased smartphone, she said it was the use of mobile messengers.

“Since many of my friends are smartphone owners nowadays, I get to send messages to them for free using services like Kakao Talk or WhatsApp, whereas I would have to pay 20 won per text message,” she said. “Not only do I get to send them messages, I can engage in conversations with them as we do often with our online messengers on personal computers.”

The competition between mobile messenger operators is spicing up in the local market as venture firms along with well-known portals are currently in a rush to grab a bigger stake in the newly emerging industry.

The number of smartphone users in Korea has topped the 7 million mark with more feature phone owners expected to switch to “smarter” phones this year.

Smartphone owners are able to not only send text messages, but also files, photos and even videos through the mobile messengers that are available in the mobile application stores.

Some of the mobile messengers like WhatsApp ― most frequently used by Apple’s iPhone owners ― charge a small cost when downloading the application, however, others like Kakao Talk and Daum’s MyPeople can be downloaded on smartphones for free.

Kakao Talk, a venture firm established in 2008, has recorded more than 7 million downloads by integrating the social networking technology with the mobile messenger.

With a single download, users are connected to all friends registered in their address book who have downloaded the Kakao Talk application.

“Other mobile messengers do have similar applications but I found the charm of Kakao Talk because I could use it more frequently since many of my friends and colleagues have downloaded it as well,” said Cho.

Witnessing the craze for such smartphone applications, Daum ― the country’s No. 2 online search engine ― jumped into the competition in June last year.

The mobile application called MyPeople enables people to engage in group conversations of up to 10 people, and allows the sharing of multi-media files that include texts, images and videos.

It recently introduced the mobile voice over Internet protocol (m-VoIP) service through which people can make voice calls using the Internet. 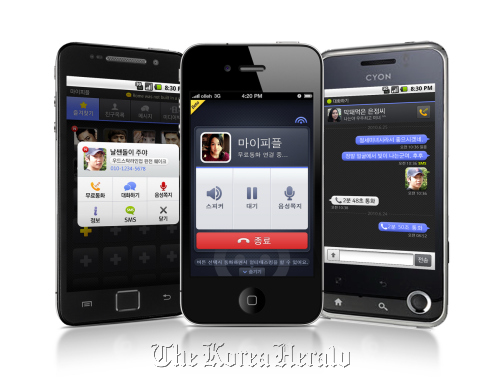 The official added
that it uses wideband voice codec to improve the voice quality for the free calls and plans on introducing a high-definition voice feature that further upgrades the quality of the call.

Daum’s biggest rival NHN, which owns Naver, the country’s top online search engine, is also preparing to launch a beta version of its mobile messenger “Naver Talk” by this month.

The new mobile messenger will integrate the features of its already-established social network home “Naver Me” and add the messenger function to it, according to Cho Jeong-sook, a representative of NHN. “Naver Me” is a service with which people can check the new updates of their blogs and registered cafes, as well as their e-mail and calendar all at once.

Cho also said that the firm plans on enabling not only smartphone users but also feature phone owners to use the mobile messaging service.

“We were initially planning to open the service by the end of last year but deferred it after deciding to offer it to a greater number of device owners,” she said. “Only smartphone owners could make use of the mobile messengers released in the market right now, but we plan to add the social networking home service and then even release it to people who do not have a smartphone.”

However, the mobile Internet voice call service will not be added to the service released this month, said Cho.

“We have no reason to hold back if the demand is high and if we have the technological skills, however, we will put our focus on creating a mobile network at this point,” she added.

Experts agree that launching new services to the short message services (SMS) for mobile like Daum and Naver is the right direction to go considering that it has already become a universal data communications channel.

Pamela Clark-Dickson, a senior analyst at Informa Telecoms and Media, said SMS will remain a key mobile messaging medium in the coming years, but mobile operators must “introduce or enable the introduction of new and innovative SMS-based services” for continued growth.

“SMS will continue to be the most popular form of messaging for a number of reasons: universal access and interoperability across devices and mobile operator networks, ease of use, reliability and low cost,” said Clark-Dickson.