The central bank’s Monetary Policy Committee kept the key rate untouched after it raised it by 25 basis points to 2.75 percent in January. The bank only confirmed its earlier stance for a gradual rate hike. 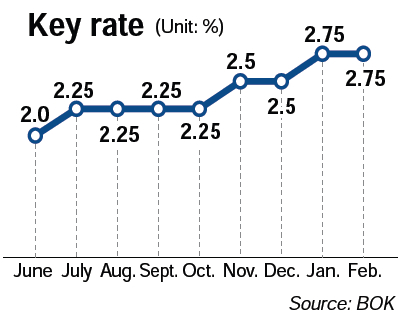 Like several past cases, the decision could be regarded as a policy failure amid the critical situation that the year-on-year growth rate of producer prices came to 6.2 percent in January, the highest level over the past two years.

The growth posted the fastest pace since a 7.8 percent advance in November 2008, according to data released the same day.

Also on a month-on-month basis, producer prices gained 1.6 percent in January from a month before, climbing for the seventh consecutive month.

Furthermore, the rate-setting came right after the BOK unveiled the figure of producer prices trend earlier in the day.

The monetary policy committee, ironically, admitted the risky situation as they said in a statement that “the sentiment over high inflationary pressure will continue.”

BOK Governor Kim Choong-soo also said, “Inflationary pressure surged in January. There is a possibility that consumer price growth will maintain the high level of about 4 percent for the time being.”
Many researchers at home and abroad had predicted a rate hike for this month, calling for preemptive measures and they say the BOK has failed to secure its independency as the monetary authority.

Woori Futures analyst Choi Dong-cheol speculated that the central bank was pressured to give up a lifting amid the situation under which the Ministry of Strategy and Finance has been skeptical about the monetary tightening.

“The ministry has already pledged the target of 5-percent GDP growth,” he said. “The BOK should have raised the rate. I think the bank delayed the hike due to the government’s growth-oriented policy.”

Aside from producer prices, the nation’s consumer prices climbed 4.1 percent in January from a year earlier as a prolonged cold spell, outbreaks of foot-and-mouth disease and higher oil costs added to inflationary pressures.

January’s growth surpassed the upper ceiling of the BOK’s inflation target band. It had put its 2011 inflation projection at about 3.5 percent.