The figure was lower than the $32.8 billion recorded in 2009 and fell short of the Bank of Korea’s earlier forecast of $29 billion. The country posted a surplus for a 10th straight month in December.

The current account, which is the broadest measure of trade, covers the flow of goods, services and capital across borders.

“Although rising oil prices are jacking up imports, exports of ships, autos and other key products remain brisk, which will lead Korea to see the surplus run for January,” said Lee Young-bok, head of the BOK’s balance of payments statistics team.

“The country gave out a more-than-expected level of dividends for investment holdings in December. Payments settled in the last two months were larger than we had expected,” he added.

The goods balance posted the second-largest surplus ever at $41.9 billion, up from $37.87 billion the year before. 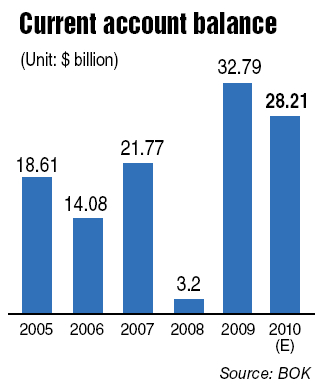 The monthly figure was $2.11 billion in December, up from $1.93 billion in November.

A major shortfall was in the service account which included outflows from Koreans’ spending abroad. The outlays reached $1.2 billion in December, widening from the $304.5 million deficit in November.

The capital and financial account also posted a net outflow of $336.2 million in December after a $2.19 billion net outflow in November.

British investment firm Barclays Capital also remained optimistic on the country’s exports, which account for about the half the economy.

“We continue to believe that the outlook for exports will brighten further in the first quarter,” said Leong Wai Ho, an economist at the bank.

He said electronic makers have begun shipping new products abroad this month which are expected to sell well.

The economy pulled off an eight-year high of 6.1 percent growth last year.

It was a turnaround from a mere 0.2 percent level of growth in 2009 and expanded at the fastest pace since growth reached 7.2 percent in 2002.

The BOK forecasted the economy to grow 4.5 percent this year while the government is seeking a 5 percent expansion.

The central bank is widely forecasted to continue tightening this year after raising the benchmark interest rate by a quarter percentage point to 2.75 percent this month.