Growth was slower in the final three months of 2010 at 0.5 percent, down from the third quarter when the economy grew 0.7 percent. 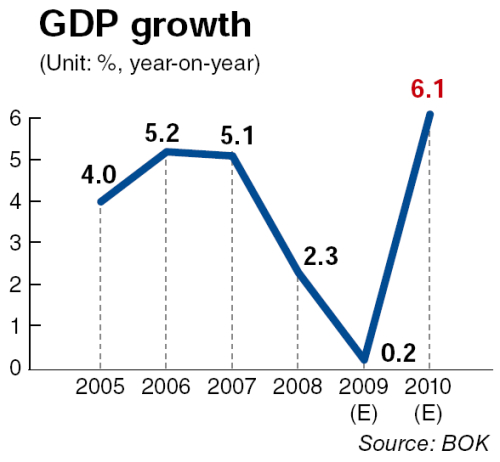 On an annual basis, Asia’s fourth-largest economy marked a turnaround from a mere 0.2 percent growth in 2009 and expanded at the fastest pace since growth reached 7.2 percent in 2002.

“In 2010, the private sector recovered its growth momentum as the contribution of domestic demand to growth sharply rose,” the Bank of Korea said in its statement.

Economists say while slowdown of growth in the fourth quarter gives the banks less need to raise borrowing costs in the coming months, more interest rate raises are likely given the inflation pressure the country is facing.

“The growth outlook is closely associated with the country’s industrial output and IT industry which are suffering the most right now. The slowing economy should give less scope for the central bank to raise borrowing costs again,” Oh Suk-tae, an economist at SC First Bank Korea, told The Korea Herald.

“If the central bank raises their 2011 growth outlook in the coming adjustment period in April, as mentioned by the BOK governor Kim Choong-soo, the likely reason for that would be stronger U.S. economy and not stronger domestic conditions.”

The BOK forecasted the economy to grow 4.5 percent this year while the government is seeking a 5 percent expansion.

The latest Dow Jones poll suggests that will GDP will expand at a rate of 1 percent to 1.5 percent in the first three months of this year.

The central bank is widely forecasted to continue tightening this year after raising the benchmark interest rate by a quarter percentage point to 2.75 percent this month.

The central bank next reviews its benchmark rate on Feb. 11.

Park Hyung-joong, an economist at Woori Investment and Securities said he expects the bank to raise the rate by 100 basis points to 3.75 percent by the end of the year.

Dissecting the weaker output in the fourth quarter, the decline was attributed by a 4.2 percent fall in industrial production in October, the biggest monthly loss in 22 months.

On the positive side, exports expanded 2.4 percent. Inflation remains the biggest concern for the economy.

“Officials face a dilemma as raising rates to tackle consumer-price growth may slow domestic consumption and restrain the economy,” Jun Min-kyoo, an economist at Korea Investment & Securities was quoted as saying.

Inflation accelerated to 3.6 percent in the fourth quarter. A BOK survey released Wednesday showed that the majority of Koreans expect the annual consumer inflation to average 3.7 percent over the next 12 months, nearing the four percent ceiling in the banks target band.

The government declared an all out “war” against inflation this month, announcing a package of measures to control prices of food and basic services.