‘I was the target of a visa hunter’


If you go online, you may be surprised to discover just how many foreign men marry Western women simply for a visa. Who would fall for such a trick?

The stereotype is desperate middle-aged Americans. In reality, “visa hunters” do not discriminate; they will target anyone. I am a 31-year-old woman from England, and I became the target of a visa hunter in Korea.

My experience started one Saturday night in Itaewon. He was sitting across from me at the bar wearing a trendy, black leather jacket and had a black scarf tied around his neck, as though he’d just arrived or was about to leave.

He looked different from everyone else around; he was tanned ― South American I thought ― and serious looking, with a set of dark brown eyes that looked as though they could bore right into your soul. I thought he was stunning.
He’d gaze across at me every now and again. When we made eye contact, there were a few smiles before he beckoned me over.

Up close he looked just as stunning; he’d certainly made an effort. When he spoke, I was surprised by how blunt he was. The first things he asked were my age and whether I had a boyfriend. I guessed he’d spent too much time in Korea, where these questions are normal.

After hearing his beautiful French accent I soon forgot about his abruptness and we began to chat normally. He told me he was 28 and an electrical engineer from Morocco. He was in Korea to start a business exporting cars. Not the usual kind of guy you meet in Itaewon, or even Korea.

I was quite impressed and tried probing for more information but he was reluctant to talk. He’d worked in Dubai, Tunisia and Malaysia, where he’d also tried to start a business but failed. We danced for a while and talked some more and then he told me how comfortable I made him feel and how happy he was around me.

That’s when he mentioned that he was looking to get married and settle down very soon.

At this point, I should perhaps have done a runner. But I didn’t. I did tell him that I wasn’t the marrying kind and asked him, jokingly, if he wanted a visa to go to England and that if he did, he’d picked the wrong woman. He shrugged it off and assured me that he could go to England whenever he liked because his uncle worked in London.

Yes, he was talking about marriage and I’d known him for approximately two hours but I still didn’t believe he was a “visa hunter.” He didn’t look the type. He was well dressed and polite with an excellent job and he seemed to have enough of his own money not to care about mine. How else could he stay here without a job while looking into starting a business, exporting cars no less?

We stayed out the entire night, drinking and talking. He didn’t seem to want to go home, even though he lived nearby. He insisted on paying for all of my drinks. It was enough that I felt guilty about how much he’d spent.

The next day we ate brunch ― he paid ― and that’s when he told me that he thought he loved me and talked about buying me a diamond ring. He said it wouldn’t be an engagement ring but a gift.

He told me they were cheap in Korea, around $500. He talked a lot about how “cheap” things were.

When we said goodbye, part of me thought I would never hear from him again but I was wrong. He texted and called me every day for the next week, something that I welcomed because, at the end of the day, I liked him and I enjoyed the attention he was giving me. 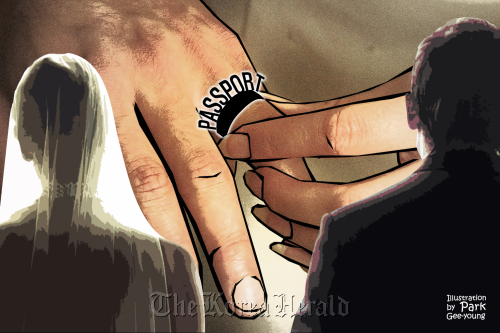 Giving him a chance

We met the following Saturday, visited an art gallery, went ice skating and to a Moroccan restaurant. Afterward, we bar-hopped until the early hours. Once again, he willingly paid for everything. He must have spent well over $300. Whenever I offered to pay he would shake his head.

He told me exporting cars was too difficult and that he might export electrical goods instead. I quizzed him about his education, his life in Morocco and how he was able to stay in Korea without earning anything. He told me money was not a problem.

He said that he could see us getting married at some point. I bluntly told him what I thought, but he said he liked my view on life and seemed keen to continue our date.

He came across as very self-assured and so sorted in his life ― he had money, ambition, life experience and I found myself, despite the quickness of it all, thinking that this guy was really quite something. On top of all that, he came across as so loving and sincere that even though we’d known each other a week, I felt like I’d known him for years.

Again, we stayed out until the early hours. We ended up going to a jjimjjilbang and sleeping there, and had lunch in the restaurant. Except for a young Arab-looking woman, the place was empty.

I was about to order when I heard her say something to him, very quietly, in what I presumed was Arabic. He replied, and it turned into a secretive and seemingly conspiratorial conversation.

They saw my glare, and he said something to her. She came up to me and said, ever so calmly, “Don’t you know who I am?”

“I’m his fiance,” she announced, showing me the diamond ring on her finger.

“What did he tell you?” she wanted to know. “Did he say he’s starting a business and that he’s a qualified engineer?”

I nodded and watched as he tried to cover her mouth to stop her from speaking.

“He doesn’t have any money; he doesn’t even have a degree. I’m the one who’s qualified and he’s ruined my life.”

The guy then grabbed me trying to lead me away from the girl. I told the girl to follow me into the ladies’ section so that we could talk alone.

I can only imagine how she was feeling. She was Tunisian, but had met him in Malaysia. He’d told her he was there to start a business and had given her the impression that he was financially secure.

They’d got engaged and she’d followed him to Korea believing that he intended to start a business there. She’d even “lent” him $8,000, which he’d promised to return.

“But once he had the money,” she said, “he kept it and then refused to marry me.”

“I then discovered that he has nothing; no money, no qualifications. And now, I’m disgraced because of him and cannot go back to Tunisia.”

She said they were still living together and they both worked in a factory ― it was all they could do. As proof, she showed me several pictures on her phone.

Then more revelations: his real age was 24, not 28, he’d been deported from Dubai after six months in prison for stealing.

She told me that he desperately wanted to go to America or England but had been refused a visa. His uncle in England wanted nothing to do with him.

“You’re a business to him,” she said. “He will spend as much money on you as it takes, on anyone who can give him what he wants.”

I told her I wouldn’t have married him and that I didn’t have any money to give him. She shrugged.

“But you’re making money,” she said. “You have a job and he’d have chipped away at you bit by bit until you agreed to marry him. Do you know what he said to me in Arabic?”

I shook my head.

“He warned me not to tell you anything and that if I did, it wouldn’t matter, because he could go out and find himself another.”

That knowledge left me feeling quite cold.

When she’d finished, I was flabbergasted: The only true thing he’d told me was his name. I thanked her for her honesty and above all, for saving me, and wished her all the luck in the world.

Outside, he was waiting. He followed me to the subway unfazed, feeding me more lies. I had to fight, even then, to ignore that smooth voice, those innocent eyes of his so as to not get sucked back in.

I asked him how he could prove his story.

His response? A charming, but secretive, smile. It was the last I saw of him.

Moral of the story

I was lucky; I didn’t fall in love with him, I didn’t marry him and I didn’t give him any money. But I did believe him and I did waste a week of my life on him.

Visa hunters are experienced and professional con-artists. I am a much wiser person now and know exactly what to look out for; especially that word, “marriage.”

My message is this: if I can meet this kind of guy, then so can you; if I can fall for his lies, then so can you. I really hope that by sharing my story, I can stop it from happening to other women here.

This is an abridged version of a story that originally appeared in the 3 Wise Monkeys website. For the full version visit http://thethreewisemonkeys.com/. ― Ed.