KT, the sole service provider for Apple’s iPhone and iPad, said it has signed up 2 million iPhone users in a little more than a year after its debut, marking a fresh milestone for a country where a growing number of tech-savvy consumers are quick to embrace new technologies and gadgets. 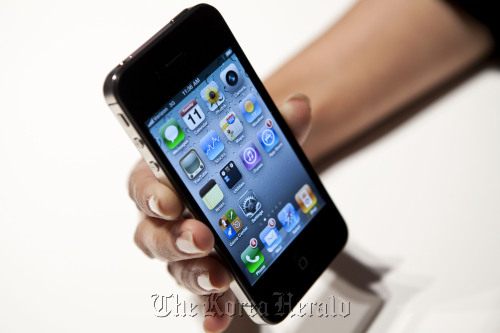 The iPhone 4, which was introduced in September last year, has been distributed twice as fast as the iPhone 3GS, with about 8,000 iPhone 4 phones being activated daily and about 250,000 units a month.

KT said the success of the iPhone 4 was achieved thanks to a number of KT’s service strategies, which include enabling iPhone 3GS users to change their phone to the advanced version while maintaining a two-year contract with the service provider, fast subscription process, 300,000 applications at Apple’s App Store, Wi-Fi spots at as many as 42,000 locations nationwide.

KT data showed that about 60 percent of the 2 million iPhone users in Korea are males in their 20s or 30s. The number of female users increased from 28 percent to 40 percent for iPhone 4.

Most iPhone users are living in Seoul and its metropolitan area, with 31 percent of the users living outside Seoul and Gyeonggi Province.

Pyo Hyun-myung, president of KT’s Mobile Business Group, said: “The achievement is the result of the combination of the iPhone’s outstanding product quality and KT’s networks, subscription plans and services.”

Smartphone holders in Korea shot up to 7 million in December last year, a dramatic increase from 500,000 in 2009. KT secured 1.8 million iPhone users and Samsung Electronics lured in 2 million Galaxy S smartphone users as of December 2010.

On Saturday, Apple announced more than 10 billion apps have been downloaded from Apple’s App Store so far.

“With more than 10 billion apps downloaded in just two and a half years ―- a staggering 7 billion apps in the year alone ― the App Store has surpassed our wildest dreams,” said Philip Schiller, Apple’s senior vice president of WorldWide Product Marketing, in a statement.

The 10 billionth app downloader, Gail Davis of Britain, received a $10,000 iTunes Gift Card. And the app, Paper Glider, by Neon Play in which players flick and fly a virtual paper airplane, was made known worldwide.

Apple indicated in a statement that App Store offers more than 350,000 apps to iPhone, iPod touch and iPad users in 90 countries. Customers can choose a variety of apps in 20 categories, including games, business, news, sports, health, reference and travel.

Apple’s CEO Steve Jobs announced he will take a medical leave of absence due to health problems last Monday. The day after Jobs’ announcement, Apple reported a record net profit of $6 billion in the last three months to Dec. 25.