Real estate market may be better off in 2011

The Land & Housing Institute said Wednesday home transaction volume and prices rose for the sixth consecutive week during the fourth quarter of last year after seeing minus 0.1 percent growth in July.

“In particular, it is noteworthy that the pace of growth has been accelerated in November and December,” it said.

Trading volume of apartments grew by 22.7 percent in October and 30 percent in November, posting the highest figure in a year since October 2009.

Land prices also took an upturn in September after being stuck in the doldrums since the 2008 global financial crisis, the institute said.

According to a recent report by Kookmin Bank, lump-sum rental prices of so-called “jeonse” rose by 7.1 percent last year, the highest rate per annum since 2003, in contrast to a stagnant property market.

Jeonse is a local rent system under which tenants pay a lump sum to rent a house for a certain term. The house is then taken back when the contract is terminated.

Mid- and small-sized apartments were the most popular with their jeonse rising 7.3 percent and 8.1 percent, respectively, compared to a 5.4 percent rise for large-sized apartments.

The market is focusing on upcoming comprehensive measures to curb rising consumer prices, which will be unveiled by the Ministry of Strategy and Finance on Thursday. The ministry said the measures will involve a policy to stabilize jeonse prices.

Last month, the government announced a scheme for measures to rescue the real estate market through support for private construction companies and loosening of regulations.

In its report to President Lee Myung-bak, the Ministry of Land, Transport and Maritime Affairs said it would abolish the parcel price ceiling system for private housing sites in all regions except Seoul in order to promote private residential construction.

This move eliminates in one stroke all of the real estate regulations introduced during the Roh Moo-hyun administration.

The ministry also announced plans to expand the targets for the purchasing of unsold private residential units on condition of resale.

Observers are predicting controversy, as all of these measures provide support solely to private construction companies.

Abolition of the ceiling system on private housing site parcel prices not only offers companies the opportunity to generate profits by building luxury apartments, but it also does away with regulations that were maintained because of the possibility of skyrocketing parcel prices when the real estate economy recovers. 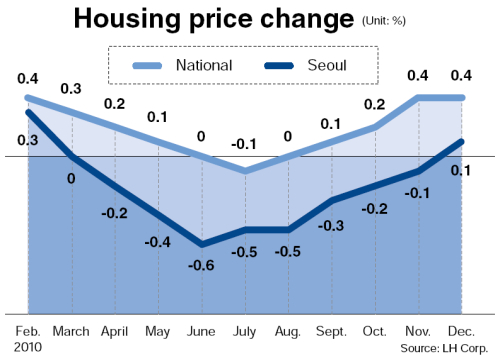