GS Group plans to increase its investments 10 percent to more than 2.2 trillion won ($1.9 billion) this year to strengthen its core businesses of energy, retail and construction and expand overseas activities.

“While focusing on our core sectors, GS will at the same time keep on seeking new growth engines and diversifying overseas markets,” a GS official said.

The conglomerate plans to hire 2,800 new employees marking a 17 percent increase from 2010. 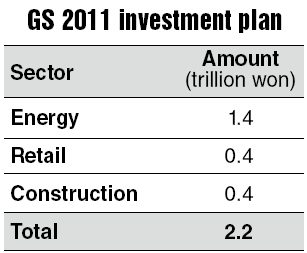 In his long-term growth vision for the group, Chairman Huh Chang-soo has been stressing the importance of innovation and original competitiveness.

“We have to pursue more software-based businesses while concentrating more on achieving mutual growth with our subcontractors to achieve a sustainable growth in the long term,” Huh said recently.

GS Caltex Corp., Korea’s second-largest oil refiner, will continue to secure industry-leading competitiveness and profitability, search for the success of its novel businesses and boost the creativity of the organization.

To this end, the refiner will inject 1.4 trillion won in its business, 900 billion won of which will be spent on its key business items such as heavy oil upgrading facilities and developing new energy sources.

It will particularly continue to diversify its foreign resource development markets to prospective regions such as the Middle East and Central Asia.

A total of 400 billion won will be invested in GS Retail Co. to increase the number of its convenience stores and Mister Donut stores nationwide.

The retail giant will also boost its merchandising and logistics capability and invest more in merger and acquisitions this year, it said.

The group will also strive to raise television and online shopping channel GS Shop’s competitiveness and improve its foreign business.

Another 400 billion will be allocated to builder GS E&C for reinforcing its overseas businesses and pursuing new growth engine businesses.

Under its goal to realize a “balance between growth and internal stability,” the builder said it will especially make efforts to diversify its overseas markets and businesses.