The pilots of the Boeing-727, operated by Iran’s national airline, attempted the emergency landing in the city of Orumiyeh after reporting a technical failure to the control tower, the semiofficial Mehr news agency reported, quoting a deputy provincial governor, Ebrahim Fatholahi.

The nature of the technical failure was unclear. A spokesman for the Iranian civil aviation organization, Abbas Mosayebi, said only that the plane “faced an incident,” state TV reported.

The network also said the aircraft disappeared from radar and went down in farmland after making a second attempt to land. There was no word on what might have caused the crash. The aircraft was headed from Tehran to Orumiyeh, capital of West Azerbaijan province, a distance of about 460 miles, or 700 kilometers.

State TV aired footage showing rescue workers and local farmers searching for survivors Sunday night in parts of the wrecked plane under snowfall and in the darkness.

Some of the passengers were only lightly wounded and able to walk off the plane and some had to be hospitalized, Mosayebi said.

Heavy snow complicated rescue efforts, said the head of the State Emergency Canter, Gholam Reza Masoumi, according to the semiofficial Fars news agency. That report also said there was fog in the area.

The plane broke into several pieces, but there was no explosion or fire, said Mahmoud Mozaffar, head of the rescue department of Iran’s Red Crescent Society, speaking on state TV. 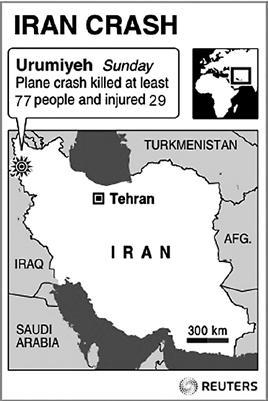 Iran has a history of frequent air accidents blamed on its aging aircraft and poor maintenance. IranAir’s fleet includes Boeing and Airbus aircraft, many of them bought before the country’s 1979 Islamic Revolution, which led to a cutoff in ties between the two nations.

Iranian airlines, including those run by the state, are chronically strapped for cash, and maintenance has suffered, experts say. U.S. sanctions prevent Iran from updating its 30-year-old American aircraft and make it difficult to get European spare parts or planes as well. The country has come to rely on Russian aircraft, many of them Soviet-era planes that are harder to get parts for since the Soviet Union’s fall.

In July 2009 a Russian-made jetliner crashed in northwest Iran shortly after taking off from the capital, killing all 168 on board.

In February 2003 a Russian-made Ilyushin 76 carrying members of the Revolutionary Guard crashed in the mountains of southeastern Iran, killing 302 people aboard.