According to the data by Statistics Korea, South Korea’s per-capita gross national income amounted to $17,175 at the end of 2009, about 18 times larger than the $960 tallied for the North.

During the cited year, the South’s nominal GNI totaled $837.2 billion, which is 37.4 times larger than $22.4 billion for the North, the data showed.

South Korea also outperformed the North in the volume of trade.

South Korean companies exported a total of $363.5 billion worth of products during the cited year, while imports amounted to $323.1 billion. Exports and imports by the North stood at $1.1 billion and $2.4 billion, respectively. 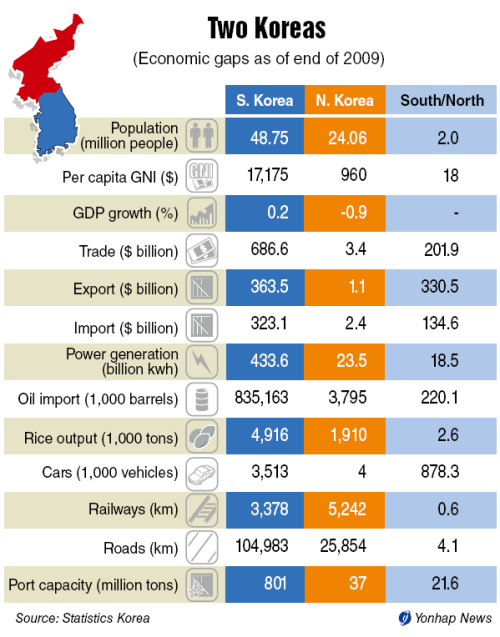 In terms of industrial output, infrastructure and many other areas as well, South Korea stayed far ahead of the North.

In addition, the data showed that the combined length of roads in South Korea stood at 104,983 kilometers, 4.1 times longer than 25,854km in the North. Power generation by the South was 18.5 times larger than the North.

The North, meanwhile, outperformed the South in a few areas including coal production and the total length of railways.

Those numerical differences highlighted the South’s faster economic growth over the North since the two opted for different development paths following the Korean War, which started exactly six decades ago today, experts said.

The North started one step ahead of the South with better industrial infrastructure built by the Japanese during their 1910-45 colonial rule and relatively rich natural resources.

The fates began to reverse, however, from the 1970s as the South started to push for export-oriented economic growth while the North kept its closed market system, failing to capitalize on its earlier lead, they said. (Yonhap News)