The government has come under fire for its recent selection of new TV channel operators. Critics say it will cause excessive competition in a saturated market and aggravate large conservative newspapers’ dominance of public opinion.

Experts are also voicing doubt about the selection committee’s fairness and correctness in assessing applicants.

It also decided to give the government-funded Yonhap news agency a license to run a news-only network.

Politicians, scholars and various groups are expressing concerns that it will result in enhancing the influence of conservative media and harm the diversity of public opinion.

They also said the selection only intensifies the rivalry to an unsustainable degree and may contribute to producing programs of lower quality. 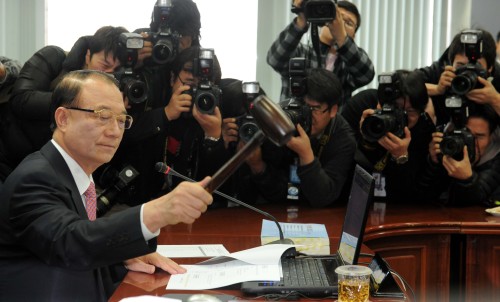 “The creation of four more general programming channels is just too many, since we already have three, which are KBS, MBC and SBS,” said Lee Sang-don, a law professor at ChungAng University. “It’s still a mystery if the existing broadcast stations will be impacted, or the new channel networks will self-destruct or whether they will be destroyed altogether.”

The decision was made after a 14-member judging committee, chaired by former KCC commissioner Lee Byeong-gi, reviewed the applications submitted by a total of 11 groups.

Shortly following the announcement, Lee said in a statement that he believes the decision was the “most appropriate and the best which could be concluded by a group of intellectuals.”

Lee, a Seoul National University professor whose fairness in performing his role was questioned due to his participation in ruling Grand National Party lawmaker Park Geun-hye’s think tank, said that the two events were completely separate and that he did not take part in giving scores.

Industry sources and opposition party legislators, however, fiercely argued that the large number of general programming channels will only increase competition in the already-saturated market.

They also claimed that the selecting the country’s four most conservative media groups as the new channel operators will further deepen the dominant print media’s influence on the market and public opinion.

As exemplary cases, the conservative newspapers requested in print soon after the announcement that the government must grant lower number channels for them to settle in the market within a few years.

Chosun Ilbo, Dong-a Ilbo and JoongAng Ilbo also stated that the Korea Communications Commission must provide full follow-up policy measures and support ― such as a larger share in the local advertisement market ― for the new general programming channels.

“This indicates that the number of major broadcasters will increase to eight, considering that there are currently four terrestrial broadcasters,” said Kim Jae-young, a professor at Chungnam National University. “It’s more than likely that the broadcast industry will entirely go for low-quality commercialization and small broadcasters like the regional media.”

Choi Young-mook of Sungkonghoe University, added that the local media industry may fall if the government goes forward with the deregulations for the benefit of conservative media which are politically influential.

Many also pointed to the selection of the Yonhap news agency as the broadcast-only channel, insisting that it may not be appropriate for the government to give channel license to a media outlet that receives up to 30 billion won in yearly support fund from the state.

Yonhap received the highest score of all five candidates in the category of the new broadcaster’s willingness to ensure fairness and act in the public’s interest, whereas it was frequently met with criticism that it has been giving government-sided reports since the introduction of Lee Myung-bak administration.

In a survey by Yonhap’s labor union last September, 65.9 percent of its employees answered negatively when asked if they believed the news agency’s reports were fair and balanced.

It was also found that Herald Media, which also applied for the broadcast-only cable channel, was disqualified after about 60 points were taken off for its biggest shareholder Daesung was accused of making repetitive investments.

But the appropriateness of the decision was raised as it was discovered that the KCC has claimed during its own public hearing earlier in September that putting restrictions on shares for new channel applicants could be labeled excessive. The restrictions do not apply to current broadcast networks.

“It’s inevitable that the judging process will take place all over again with the end of the conservative Lee Myung-bak administration,” said Rep. Chung Sye-kyun of the major opposition Democratic Party during a Supreme Council meeting on Monday.