Hallyu website aims to link Korea with the world

Korea.com, an English website specializing in “hallyu,” or the Korean Wave, seeks to become a center of communications between Korea and the world by widening its coverage extensively to information technology, culture and tourism.

Hallyu, was first initiated by mega-hit drama “Winter Sonata,” which has been popular in Asia since the early 2000s.

Though the trend seemed to wane in the past few years, it has been bouncing back recently on the strength of the country’s unique pop music and films.

Hallyu is projected to get a further boost as it has been diversified to the country’s cuisine and information technology, with target nations including to the United States and China. 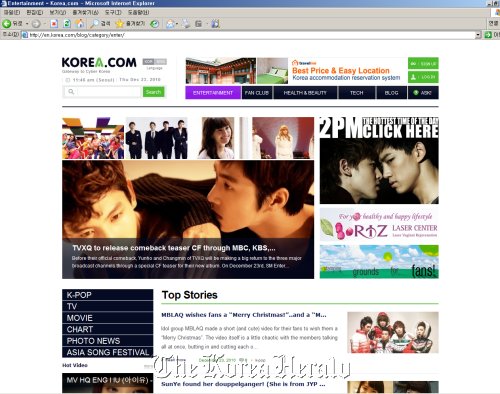 Despite the huge number of overseas hallyu fans and their demand for information on Korea, however, there has been a constant lack of English content on hallyu.

A lot of Korean portal and entertainment websites, even those operated by top entertainment firms such as YG entertainment and JYP Entertainment, mostly offer content in Korean, which has been frustrating a lot of foreign users.

Korea.com is aiming to resolve such a shortage of English content on Korea, said Korea.com Communications, a subsidiary of local energy firm Daesung Group which operates the site.

“We have been seeing a lot of foreign fans showing a big interest in hallyu and Korea. But the problem is that there are just not enough contents available for them to consume,” Kim Nam-jung, the firm’s communications manager, told The Korea Herald.

“Without producing more contents on Korean celebrities and culture in foreign languages including English, Japanese and Chinese, hallyu cannot branch out further to the world.”

The new website has got off to a good start. It has drawn over 500,000 page views as of October, just two months after opening, and already tops most search engine results on the keyword “Korea,” according to the company.

The firm attributes its success to its quality, original English content and good accessibility.

The site specializes in offering diverse information on Korea’s culture and IT, which are two areas that foreign nationals have the biggest interest in. Stories come from in-house writers as well as associate writers who work from abroad.

Currently, around 20 correspondents from countries including Singapore and the U.S., regularly contribute their stories to the site, offering different perspectives on hallyu, the firm said.

Korea.com is linked with major social networking services including Facebook and Twitter which largely helped it raise awareness among users online.

Yet alongside offering quality services to users, the website is ambitiously seeking profit-making businesses at the same time, it said.

“Whereas the contents on hallyu are provided as a service to users, we are looking for business opportunities in medical tourism and IT sectors mostly in a business-to-business format,” Kim said.

The company is already in the planning stage for such projects, which will be launched next year in collaboration with top local industry players, she added.

To keep up the momentum of expansion, meanwhile, the firm is planning to introduce a Chinese version of the Korea.com website in the near future. It has selected the language as the potential for hallyu in the communist state is likely to be enormous, Kim said.