The outdoor market has emerged as the sole bright spot in the apparel sector. The industry is still feeling the pinch from the economic slump in 2008-09 that saw scores of clothing makers go under.

In stark contrast, leading outdoor brands such as the North Face, Kolon Sport and K2 have been posting record sales every year.

The segment’s domestic market is valued at over 3 trillion won ($2.6 billion) this year, up 50 percent from last year and sixfold from 10 years ago, according to the Korea Federation of Textile Industries.

The economic slowdown has boosted the market as people shy away from costly leisure activities like golf in favor of hiking, trekking, camping and other less expensive pursuits.

The growth has also been assisted by a fast-aging population that has made outdoor sports and fitness activities popular. In a country where mountains account for 70 percent of the territory, the number of regular hikers has multiplied in recent years to 10 million. 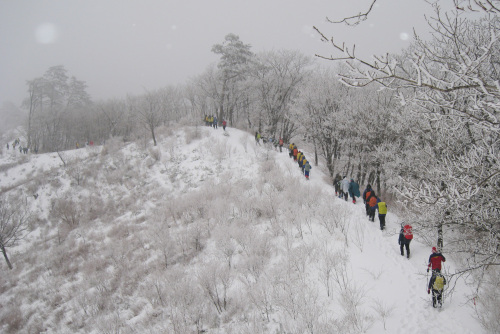 Outdoor clothes appeal to consumers for their functionality, durability and comfort. Technological advances gave rise to a variety of applications making them practical for everyday use and able to reach the mass market.

As the industry grew, clothing companies began combining function with style to provide more sophisticated and various designs and colors for all ages. Outdoor clothes are now in many people’s daily life as multipurpose wear.

“Aging populations and the rise in leisure and physical activities have led to increasing demand for outdoor apparel and casual wear,” the industry group said in a report.

“They are no longer limited to outdoor activities and their buyers are widening to female and younger customers.”

Currently, there are more than 200 outdoor labels operating in Korea. Five top players ― the North Face, Kolon Sport, K2, Black Yak and Columbia Sportswear ― together take up about 60 percent of the market.

The North Face posted more than 500 billion won in sales so far this year, the highest annual revenue posted by a single outdoor brand in Korea.

In the entire fashion and textile industry, Samsung Group’s affiliate Cheil Industries is the sole company to have recorded 500 billion won in yearly retail sales.

“The performance suggests that not just an outdoor brand but a fashion brand could grow beyond the limit,” said Sung Ki-hak, chief executive of Goldwin Korea, the North Face license holder here. “With big potential in the outdoor market, we will continue to grow next year.”

The North Face’s classic puffy down jacket ― known as the Nuptse or 700 jacket ― is one of the hottest items of the season among young customers. All 2010 units of its limited edition “Quantum Nuptse” were sold out within two months after its introduction in August. The jackets are usually available until December, a company official said.

“Our broad customer base made up of diverse generations proves the quality of our products,” said Jang Hee-soo, Goldwin Korea’s marketing team assistant manager.

“We test our products with professional mountaineers. The product quality is the key to survival in this increasingly competitive climate.”

Small competiors have also seen record turnovers every year. Kolon Sport, the second-biggest outdoor label by sales, expects its revenue to come in at around 420 billion won this year.

Millet, the French apparel leader, has gained recognition from local consumers for a variety of products including clothes, footwear, backpacks and accessories and other gear.

As the market matures and competition heats up, companies are striving to diversify revenue sources.

Some are shifting their attention overseas, especially to China, one of the rapidly emerging apparel markets, growing at an average 14 percent over the past decade. 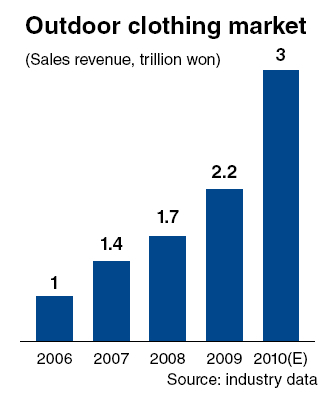 Labels including the North Face, Kolon Sport, Black Yak and Millet have made inroads into China. TrekSta made the first move in 1995.

Kolon Sport has opened 28 branches in China since 2006. Sales are projected to reach 10 billion won this year, more than triple those worth 3 billion won in 2009.

It aims to expand its sales volume in China to 100 billion won by 2015, the company said.

“China is transforming into an enormous consumer goods market from a manufacturing base,” a company official said. “We feel an urgent need for investment in distribution and marketing to take a leap forward to become a global brand.”

Millet is also stepping up efforts to expand its presence in China. The French firm has been operating a headquarter store in Beijing and several large branches across the country since 2008.

Its outdoor clothing sector will keep expanding with Chinese lifestyle increasingly embracing wellness as the country urbanizes and its income level goes up, a team researcher said in a report.

After the decade’s high growth, Korea’s ripening market is expected to become more diversified and micro-targeted with the number of players and customers still on the rise.

The Korea Federation of Textile Industries noted that there will be a boom in environmentally friendly products and green manufacturing.

Domestic and global fashion giants would spur competition as they seek to dive into the lucrative market taking advantage of their already-popular brands , according to a KIS official.

“It is going to be all about brands,” he said. “A large number of brand-conscious Koreans will probably choose well-known brands given the same quality, although they will have to pay more.”

In Korea, Cheil Industries is preparing to set out its outdoor business through a joint venture with an Italian label, La Sportiva.

The two signed an agreement in June to launch a global line of the 82-year-old technical outdoor apparel under the trademark.

In the global market, multinational giants such as Nike and Adidas are gearing up to tap the segment with their outdoor lines, according to the industry.

Nike launched its outdoor brand All Condition Gear in the 1980s and has just launched its Nike 6.0 action sports brand.

Arch-rival Adidas plans to push its collection named Terrex. The German sport giant made such attempts in the past, but failed to build a strong footing.

The outdoor brand introduced in 2007 boasts more than $260 million annual revenue. Adidas said it plans to “establish itself as a benchmark in the outdoor sector by 2015.”