Koreans’ expenditures on alcohol and cigarettes reached 3.49 trillion won ($3.08 billion) on a seasonally adjusted basis in the July-September period, accounting for 2.35 percent of their total consumption spending, according to data by the Bank of Korea. In the cited period, total households’ expenditures stood at 148.6 trillion won.

The share of third-quarter spending on alcohol and cigarettes reached the lowest level since 1970 when the central bank compiled related data. 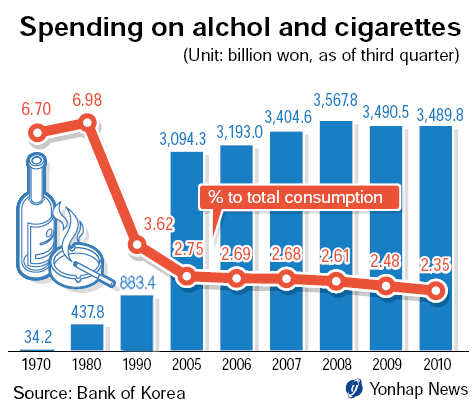 The economic recovery revived consumer spending, helping the volume of households’ expenditures grow since the second quarter of last year, but the percentage of their spending on those products has declined.

But Koreans have spent more money on medical services, indicating the number of health-conscious people are increasing amid an aging society.