The National Human Rights Commission’s top decision-making committee of the whole has decided to present their opinions to the Constitutional Court that the clause infringes on homosexuals’ rights to make their own sexual decisions and other fundamental rights.

Clause No. 92 in the code, established in 1962, stipulates that those who are engaged in “sodomy or other acts of molestation” are to be given a jail sentence of up to one year.

The NHRC has been reviewing the constitutionality of the clause, which is currently pending at the Constitutional Court, since May when a civic group, supportive of sexual minorities in the military, filed a petition to the commission. 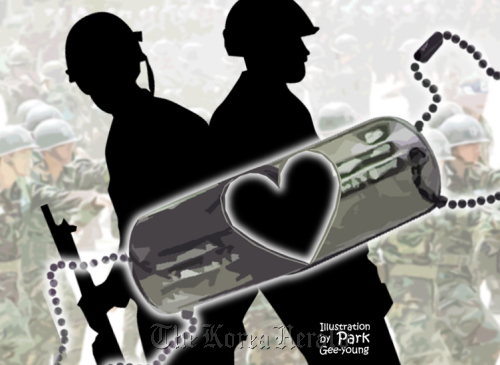 “We have determined that homosexuality does not directly affect military combat power, moral fiber and unity. Criminal punishment according to the penal code infringes on their rights to equality and runs counter to the trend of the times,” the commission said during its committee meeting.

“We found that there are no cases overseas in which soldiers were punished for homosexuality. Militaries in Canada, Australia and Israel allow homosexuals to join them even after they came out of the closet.”

According to the commission data, a total of 176 cases of homosexuality in the military, handled in accord with the clause in question, were registered from 2004-2007. Of them, only four cases took place among consenting individuals.

“Korea currently runs a draft system. In the hierarchical military society, one with a lower rank could be forced to consent to homosexuality. Taking into consideration Korean customs and rules, the clause should be kept alive,” said an official on condition of anonymity.

Over the decision, citizens and experts have shown mixed reactions.

“We have stressed the concept of human rights for social minorities. However, it is a matter of an individual’s sexual orientation or taste, not a matter of hu man rights,” said Chang Heon-il, a liberal arts professor at Myongji University.

“We should have to protect the human rights of minorities. However, the purpose should be clear and reasonable. Homosexuality could get in the way of military efforts to achieve its goal of national defense, and could also undermine military order and morale.”

Huh Jeon, a Presbyterian pastor who retired as a brigadier Army general in 1991, voiced concern that the elimination could encourage same-sex relationships in the military.

“In special military surroundings, the possibility of homosexuality remains high. Removal of the clause could lead to relaxation of military discipline and encourage same-sex relationships,” Huh said.

Park Ki-ho, office manager of Korea Gay Men’s Human Rights Group, said “The NHRC decision is only natural. Along with the deletion of the clause, we hope other unreasonable things against sexual minorities in the military will be removed.”

Controversy has also been fanned by the derogatory term used in the clause, which critics say imply social prejudices against homosexuals. It uses “gyegan” (sex between chickens) to refer to sodomy.

In August 2008, a military court filed a request to the Constitutional Court that it review the constitutionality of the law. The court said that punishing unforced sexual acts between people of the same sex was excessive.

The military court also said at the time that it was unclear what the phrase “other acts of molestations” in the clause referred to.

“It is unclear what the clause is targeting forceful molestations or unforced acts, or molestations between males or females, or between people of the opposite sex,” the court said.