“After the crisis, we learned that in addition to inter-governmental cooperation, the private sector contribution is imperative in promoting investment and employment, which form the pillars of sustainable growth,” Sohn Kyung-shik, Chairman and CEO of the Korea Chamber of Commerce and Industry said in an interview with The Korea Herald.

The summit-expected to bring together some 120 CEOs from all over the world-is the first of its kind to be launched since the Group of 20 economies formed the G20.

The South Korean government proposed the idea of meeting in January at the 40th annual meeting of the World Economic Forum.

France, the next host for the G20, has expressed its intent to continue the business summit.

The main objective of the G20 business summit was to better coordinate the global corporate sector’s efforts with governments to prevent future financial crises and prepare for possible recurrences.

The G20 itself was created in 2008 amid the financial catastrophe that hit the world a decade after the Asian financial meltdown in the late 1990s.

To help the leaders and CEOs cut to the chase, the corporate leaders will be directly sitting down with the heads of the world’s top 20 economies during the summit.

“These discussions will form a platform for international economic collaboration encompassing both the private and public sectors to ultimately enhance the credibility of the G20 summit itself,” Sohn said.

The summit will be dealing with four topics: trade and foreign direct investment, finance, green growth and corporate social responsibility.

But as most summit watchers point out, trade investment and finance was likely to top the agenda.

“Discussions will center on how to stimulate trade and foreign direct investment, both of which have contracted following the latest financial crisis,” Sohn predicted.

Getting countries to undo the protectionist trade policies they started to implement in the aftermath of the recent crisis would be a challenge the discussions will be met with, he said.

Despite mounting calls for governments to promote free trade, many have locked their doors for fear of being affected by another meltdown.

The G20 business summit and also the main financial summit hopes to address these concerns and send the message that open trade is the key for increasing the world’s overall wealth.

Recent tentative agreements reached between the finance ministers and central bankers of the top 20 countries aimed at taming an ongoing currency debate among the world’s top economies may help trigger investment, experts said.

Sohn expected the renewed emphasis on free trade to become an impetus for the delayed ratification of South Korea’s free trade agreement with the U.S.

“The spirit of free trade may have a positive effect on the ratification of the FTA with the U.S.,” he said. 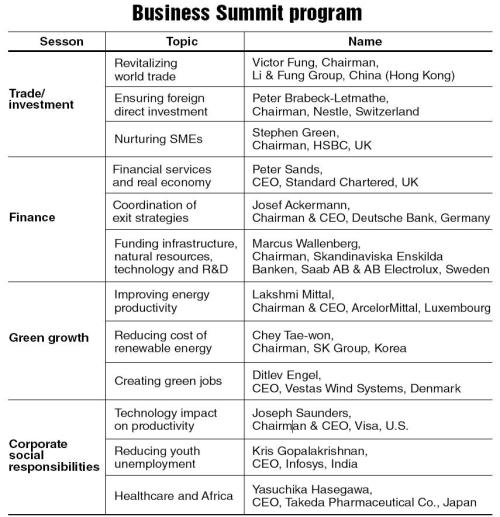 On the finance front, Sohn said discussion would mainly center how to coordinate an exit strategy from the earlier expansionary fiscal policies unleashed by most top economies in the wake of the 2008 crisis.

The debate would most likely have a positive effect on shaping the Korea Initiatives that Seoul is seeking to extract from this round of the G20 summit, he added.

Seoul is hoping to see progress on creating a financial safety network under which countries can support each other to better cope under crisis situations.

Touching on criticism of the lack of binding measures to come from the G20 summit, Sohn said he expected the CEOs and country leaders to reach agreements on wide-sweeping principles that would eventually have a carry-on effect around the world.

“The fact that the corporate and government leaders agree at all on common principles would be meaningful,” he said.