On the back of the lingering global economic downturn and comparatively brighter circumstances at home, no more than 900 South Koreans are anticipated to move out of the country by the end of this year, falling below the 1,000-mark for the first time in a decade, the Foreign Ministry said.

According to the figures released for the annual parliamentary audit and inspection, a total of 694 South Koreans have moved abroad as of September, with an average of 77 people registering overseas per month. 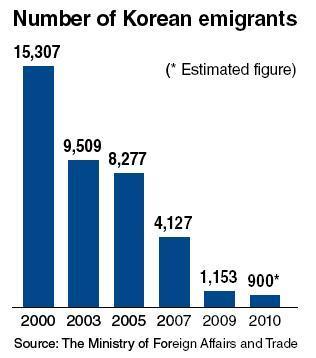 Tens of thousands of South Koreans moved overseas each year during the 1970s and 80s, seeking to earn more money by working in wealthier countries such as the U.S. The number of emigrants began to decrease following the industrialization in the late ’80s through ’90s, which resulted in rapid economic development at home.

“We view the number of emigrants dropped further due to the global downturn which made it harder to find jobs overseas, whereas the situation at home has improved in comparison,” an official at the Foreign Ministry said.

The U.S. remains the most popular destination for Korean emigrants with 393 people moving there this year, followed by Canada at 174, Australia 107 and New Zealand 10, the ministry said.

Meanwhile, separate government data showed among 2.87 million South Korean nationals living abroad, up to 2.29 million will be eligible to vote in the parliamentary elections scheduled to be held in 2012. The number represents more than 6 percent of the nation’s 37.8 million eligible voters.

The election law was revised in February last year to grant suffrage Korean residents overseas, including some 1.22 million people with a permanent resident status in countries such as the U.S. and Japan. Under the revision, some of them cast their ballots for the first time in the parliamentary by-elections held on April 9 in 2009.

The measure could wield strong influence in the upcoming elections, especially considering the fact that some of the election results depended on a narrow margin of no more than hundreds of thousands of votes.

Up to 73 percent, or 2.1 million overseas Koreans, are living in the U.S., Japan and China, with more than 1.65 million staying temporarily for work or studying purposes, according to the National Election Commission.

The figures, however, could only be temporary as many people are hesitant to register as living aboard or report acquiring a permanent resident status or citizenship in another country, the election watchdog said.

In 2007 the top court here ruled unconstitutional the law that restricted the voting rights of overseas Koreans, prompting moves to grasp the exact number of Korean nationals living abroad and grant them suffrage. The National Assembly approved of the bill calling for such rights last year.