The Ministry of Justice recently announced a “revision of HIV infected people regulations.” According to the revised regulations, while HIV tests for foreign teachers on E-2 visas will remain in place, a positive test result will not automatically result in visa cancellation or deportation.

According to Ahn Kyu-suk, a public relations official with the Korea Immigration Service, though the rules have been slightly changed, the safety of Korean citizens is still the main concern. Ahn said that deportation can still occur if the health administration reports someone being a potential hazard to societal health.

Of note is also the fact that according to the Ministry of Justice there has yet to be any reported cases of teachers testing positive for HIV.

The MOJ’s move to ease restrictions on HIV testing is considered in-line with the government’s January pledge to remove restrictions for foreigners based on HIV status. Education officials, however, are urging the MOJ to reinstate deportation and to institute further restrictions in the form of annual re-tests for HIV.

In a reply to proposals from national, provincial and municipal Education Review Committees in February and March, the Ministry of Education agreed to petition the Ministry of Justice to revise regulations to give legally binding force to re-testing requirements already in place at some public schools.

An official with the KIS meanwhile said that as far as their regulations go, teachers on E-2 visas only need to get a HIV test upon the initial issuance of an E-2 visa, not for the renewal of a contract.

The National Institute for International Education Development, a division of the MOE, which oversees the government’s English Program in Korea, says that its rules are in accordance with the MOJ’s regulations, but not everyone at NIIED is in agreement with the new regulations.

“We actually disagree with the MOJ’s decision, because as an educational unit we listened to medical doctors and parents of students, and they obviously want re-testing legislation for HIV testing,” said an official only willing to be identified by the surname Jung.

“For the extension of visa or renewal, submitting an HIV test should be mandatory, but since we have to listen to what the MOJ is instructing, we changed our regulations.” 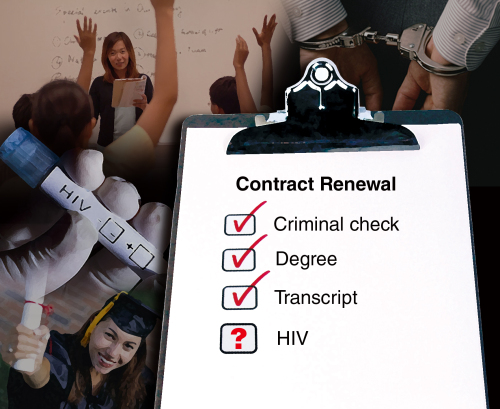 Jung added that negotiations with the MOJ on the matter were continuing and that as far as the NIIED was concerned, HIV test submissions, deportation, and re-testing should be enforced because of concerns expressed by parents and doctors.

Concerns were highlighted in a press release from the prime minister’s office on July 12 informing people of the results of a survey on whether or not HIV testing of foreigners should be abolished. In two surveys -- one of 500 men and women over 20, the other of 50 professionals (teachers, doctors) -- the results overwhelmingly indicated the desire to continue testing foreigners for HIV -- 80.7 percent for the former and 82 percent for the latter.

Citing the survey as one reason for keeping HIV testing regulations rigid, Choi Hong-jun, deputy director of EPIK, said that even though the MOJ has revised its regulations, negotiations are underway to reverse the new policy.

When asked what happens if someone refuses a re-test for contract renewal, an SMOE official who asked not to be named said that a policy for that possibility has yet to be developed. The official added that there have been no cases of teachers renewing their contracts refusing to submit to re-tests for HIV.

In Ulsan, however, it is a different matter. Kang Jung-hee of school policy division of the Ulsan Office of Education said if teachers refuse a re-test, the next step is fairly easy.

“They simply can’t contract with us. The case was with the renewal of a contract, and the contract specifically said that they need to submit new HIV tests, and you know as any other contracts are done, if you don’t agree on one part, then, no contract is signed,” said Kang.

Kang also said there had been one case where a teacher wanted a contract renewal, but did not agree with having to be tested again for HIV. The case has been in arbitration for a year now. Kyung Hee law professor and U.S. attorney Benjamin Wagner represents the teacher who is bringing the challenge.

While declining to comment on the details of the case until the arbitrator reaches his decision, Wagner said, “This issue represents just one of a series of race-based policies that treat foreigners as presenting a special risk or threat just because they are non-Korean. The ROK has a duty to work toward the elimination of all forms of racial discrimination for the benefit of citizens and non-citizens alike.”

As for how Korea’s mixed message plays abroad, Joseph Amon, director of the Health and Human Rights Division for Human Rights Watch -- an NGO that monitors human rights around the world -- feels that re-testing is discriminatory.

“Regular HIV testing of foreigners in Korea is not a rational public health strategy; it is discriminatory, and it should be stopped. HIV does not spread in Korea only from foreigners, it does not spread casually in classrooms; and it can not be stopped unless the kinds of myths and fears that this policy perpetuates are addressed.”

Commenting further on much of the misinformation that has been circulated on HIV/AIDS around Korea, Amon said, “This policy does a disservice to foreign teachers in Korea and to all Koreans who deserve accurate information on HIV, and government policies based upon science and human rights -- not ignorance and bias.”