A sagging global economy may force consumers to cut down on spending, a possibility weighing down on Samsung, the world’s No. 1 TV maker and No. 2 handset maker. The Korean company is also the world’s top maker of memory chips and displays.

“The biggest risk for Samsung is a slowdown in IT demand stemming from the global economic slowdown,” Song Jong-ho, an analyst at Daewoo Securities, said, citing the European debt crisis and jitters about the U.S. and Chinese economies. 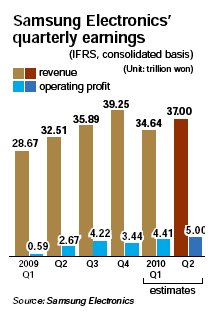 Although Samsung’s profit is set to continue to rise in the third quarter, it faces a decline in the fourth quarter, he said.

Samsung’s profit from handset sales is also expected to slide in the second half as Samsung boosts marketing spending to revive its weak smartphone sales. Samsung is aggressively driving sales of its flagship smartphone Galaxy S, which was launched via 100 carriers including the top five U.S. operators.

The stellar performance is largely attributed to Samsung’s chip business, which offsets sluggish performance in its handset business.

The global chip market has emerged from a three-year downturn on the back of limited supply combined with recovery in the demand for PCs, the main consumer of memory chips.

But chip prices are expected to ease in the fourth quarter as suppliers are raising output while demand growth is losing momentum.

In the TV market, price competition is expected to intensify as Japanese companies cut prices to gain market share from Korean rivals Samsung and LG.

“Overall, the fourth quarter will be difficult,” Song said.

Samsung is set to report its second-quarter earnings on July 30, and eyes are on its forecast for the latter half of this year.

“The market attention has now turned to the third quarter. There are concerns that the IT industry may slow down in the third quarter because of inventory burdens in China and European woes,” Park Young, an analyst at Woori Securities & Investment, said.

Samsung has fast emerged from the deepest global economic downturn in decades and posted a historically-high annual profit in 2009. In the first quarter of this year, Samsung also reported a record-high operating profit of 4.4 trillion won.

In May, the cash-flush Korean giant announced an aggressive investment plan for this year, including 11 trillion won in semiconductors and 5 trillion won in displays as the company seeks to widen its lead over rivals.