By
Published : Jun 4, 2010 - 16:04       Updated : Jun 4, 2010 - 16:04
I have been trying to introduce my Swedish friend to healthful Korean vegetables, or namul. He has been stressing out lately and expressed to me that he desperately needed to clear his head. I suggested that he try one of my favorite spring veggies, fatsia (or dureup in Hangeul), to help relieve his anxiety.

Some claim that fatsia has the ability to relieve stress, allow deep sleep, and improve stamina. The skin of the fatsia shoot is also believed to have medicinal properties. I convinced my friend to try it -- after all, what harm could it do? Fatsia is a vegetable that is high in fiber and low in calories. At the very least, he would be adding a healthful new food to his diet. To make it easy for him, I invited him over to taste-test my recipe for steamed fatsia shoots served with a hot pepper dipping sauce. Happily for me, he accepted. Now, whether it was the fatsia or the romantic dinner with me that calmed his nerves that night, the world will never know. But he looked pretty relaxed by the end of the evening, I can assure you!

Fatsia shoots are only available in April and May, so hurry and pick some up quickly! Fatsia roots are silky, smooth, and are considered a wild delicacy, much loved by Korean health advocates and foodies. Fatsia shoots are popular and expensive, because they are cultivated in mountainous areas. According to the women living in the Cheongtae Mountain area in Pyeongchang, Gangwon Province, fatsia shoots are the jewels of the mountain, and only a little bit is needed to revitalize the body.

Fatsia is a member of the araliaceous tree family, which have thorns on their branches. The trees bloom in August, and the soft shoots that sprout in the spring are carefully gathered and sold at the market at a high price, partly because they are highly valued for their health benefits. There are only 40 different types of fatsia in the world. Four are grown in Korea, and all four are edible.

The women of Gangwon Province walk a narrow road covered with bushes to pick the fatsia shoots. The shoots can be found on the branches of the fatsia trees. The collection of shoots is tedious -- because the shoots must be hand-picked, one by one, from the trees. This is another reason they are so expensive, not to mention the fact that they are only available for a very short period each year. The women who pick the shoots will often stop for a lunch of fatsia shoots with bean paste, pepper sauce, and rice. I always like it when workers consume the product they provide! That means it has to be good.

Fatisa is considered effective to help treat glucosuria (diabetes), gastroenteric disorders (stomach disease), arteriosclerosis, and high blood pressure. It is also considered effective in enhancing kidney function. As mentioned above, fatsia is most commonly used for stress relief, to help clear the mind, and to allow one to sleep deeply. 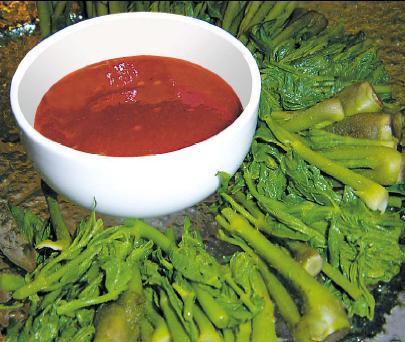 As I’ve implied, these shoots boast a truly excellent nutritional profile. One hundred grams of fatsia shoots has 5.9 grams carbohydrates, 5.6 grams protein (with excellent amino acid composition), and 5.3 grams iron. It’s high in vitamins A, C, B1, and B2. It also contains saponine, an antioxidant known to lower cholesterol, blood sugar, and lipid levels. Fatsia shoots are also rich in calcium.

There are many ways to cook fatsia, but most people will tell you to boil it for a few minutes and dip it in a hot sauce. The Japanese sometimes fry it in a tempura batter. However, steaming is best method from a nutritional standpoint, because then you won’t lose any of the valuable nutrients. As an experiment, I decided to sauté the shoots with olive oil and sesame oil, just to spice things up a bit and test the versatility of this interesting vegetable. I chose the mixture of olive oil and sesame oil for flavoring, as well as nutritional value. Olive oil is a healthy polyunsaturated fat and is beneficial to anyone’s diet. The result was a delicious, flavorful dish that packs a solid nutritional punch, with plenty of protein and good fats. You are also welcome to try this method, or follow the recipe below for a simpler, fresher, more traditionally Korean way of eating this fabulous veggie.

Samia Mounts is a long-time nutritionist and gourmet aficionado. She works as the Assistant Principal at Seoul American Elementary School.