By
Published : May 17, 2010 - 16:11       Updated : May 17, 2010 - 16:11
Korea Immigration Service’s new visa for skilled foreign workers has been met with mixed reactions from expats here. Designed to improve the environment for highly-skilled global employees living in Korea, its critics say requirements to obtain the new visa are too strict, while others say the point system is on par with those of most developed countries.

Fielding Hong, who is currently working in Seoul as a public school English teacher, is optimistic about his chances of procuring the new F-2-7 visa, though he admits that it may take some time.

“Even though I’m committed to staying in Korea, being on an E-2 visa makes it difficult to have the time to study. If I had an F-2-7 visa, I would definitely enroll in a university Korean language program and find work that would complement that schedule,” he said. “I know that obtaining this visa will take a lot of time and energy, but I’m willing to invest in that process.”

Having given up on the F-4 visa -- he is a 4th-generation Korean; the eligibility for the F-4 visa is 3rd generation -- Hong is now hoping to eventually qualify for the F-2-7 visa. His current point total is 36 of the required 80. In order to ramp up his points, he is studying Korean at a hagwon and is looking into other areas where he may improve his score.


Matthew Wright, an American private businessperson, who has lived in Korea for the past five years, says the new visa could be a boon for skilled foreign labor in Korea.

“If this visa actually works, it could be one of the greatest things that ever happened for immigration in Korea. It’s not an easy visa and it will take a little bit of footwork, but it is one step in the right direction,” he said.

Introduced on Feb. 1, the visa was created to “enhance convenience and improve (the) environment for highly skilled global human resources living in Korea,” Seok Dong-hyun, commissioner of Korea Immigration Service, told Expat Living in an e-mail.

Originally called the F-2-S visa, the new F-2-7 visa is eligible to anyone who has held an E-1 (Professorship), E-2 (Foreign Language Instructor), E-3 (Research), E-4 (Technology Transfer), through E-5 (Special Profession) or E-7 (Special Occupation) visa for at least one year. Of the E-series visas, only E-6 (Art / Entertainment) visa holders are not eligible to apply for the new F-2-7 visa.

Receiving one of the visas requires that the applicant receive at least 80 points in a special point system that the Korea Immigration Service has established specifically for the new visa. The point system takes a variety of factors into consideration, giving a range of points to varying answers and weighing the most desirable answers. The main factors include age, academic background, proficiency in Korean, and annual income. An additional category provides opportunities to get more points if you’ve completed a social integration course, studied in Korea, done volunteer work in Korea, or worked overseas as a specialist. Points are deducted if the applicant or their dependents have violated any immigration laws or regulations in Korea.

The visa carries with it a bevy of benefits, including more autonomy in employment options, the right to own a business in your own name, a three-year validity period, and a shortened path to a permanent residency visa (F-5), down from five years to three.

But if, according to KIS Deputy Director and Immigration spokesperson Ahn Kyu-suk, the goal is to attract global talent and support their settlement in Korea, how far will this visa actually go to help reach that goal?

Compared to other countries’ point systems, the F-2-7 system seems reasonable in some areas, yet unrealistic in others.

Chris Backe who wrote about the new visa on his blog, describes what he finds to be a flaw in the point system’s logic. “I appreciate that Korea would want to set the bar high, but setting it too high really limits the number of people they’re going to attract,” he said. “The highly qualified teachers with master’s degrees and language skills, or business executives ready and willing to settle down and call Korea home for the long-term ... the people that qualify are most able to easily move on to another country.”

Since most E-class visa holders hold B.A. degrees, rather than master’s degrees, it would drop that group of applicants back 10 points. Backe suggested one possible way to make up that difference. “Time in the country should be rewarded -- perhaps 2 points per year legally residing in Korea. While you don’t want to give someone residency just because they’ve been here for 10 years, time in country does reflect on a person’s willingness or ability to stay here.”

Although there are a variety ways of reaching the 80 points, the most generic model of the successful applicant would be someone between the ages of 30-34 (25 points), with a master’s degree (20 points), a high level of Korean proficiency (20 points), who had completed the Korean Immigration and Integration Program (10 points). In this scenario, even salary wouldn’t be a factor -- even if the candidate is in the lowest salary range, under 35 million won annually (5 points), they would receive 80 points.

Is this profile unattainably high?

It depends on how many of these visas Immigration plans to render, and ultimately, the long term goals of the visa from an immigration standpoint. Every country has employment restrictions on foreign workers, and Korea’s goal is not to simply issue residency visas to every E-class visa holder who wants to live in Korea for a few years and have complete employment freedom, before heading back to their own country.

Wright, who has done a lot of research into the visa for a website community board, says he finds no problem with the point system having high standards, within reason.

“It’s not a right, you have to earn it. If someone’s coming over here and wants more freedom, they have to earn it.” And he intends to do just that, by investing the time and energy to add to his current point total of 35. Wright has already registered to take the Korean Immigration and Integration Program and will be taking the test to verify his Korean proficiency, among other things. Wright did, however, express some frustrations with the new visa, namely the complicated structure, lack of clear information, and inconsistent implementation.

KIS Deputy Director and Immigration spokesperson Ahn says that the reason for these issues is that the visa is in fact, a pilot program -- the first of its nature in Korea. This may also be the reason that the visa has still not been widely advertised. In fact, since the visa was introduced, there have been only two applicants -- both of which were successful -- many expats said they simply did not know about the visa. 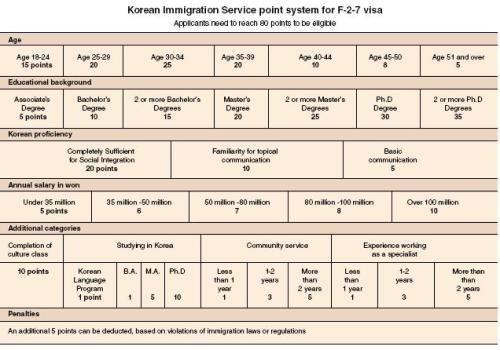 Ahn is one voice at the KIS in favor of amending some of the standards. “The standard set by the point system, which is the initial policy attempt to confer residence status, might be considered to be comparatively high in my personal view.”

“Hopefully, offering this visa will facilitate more diversity in Korea, which I think is always a good thing. Not only in terms of culture, but also in terms of ideas and innovation and perspective,” said Hong.