Praise is meaningless if not allowed to criticize

Also a regular blog reader, she took the repeated and repetitive theme of complaining about Korea, and exaggerated it to ridiculous degrees, partly to vent, and partly in hopes that the exaggeration would prompt some of the whiners to shake their heads and say, “Wait a minute ... Korea’s not as bad as all that.” She named the blog Lousy Korea, and while she expected some defensiveness from people who missed her point, she did not expect what happened. 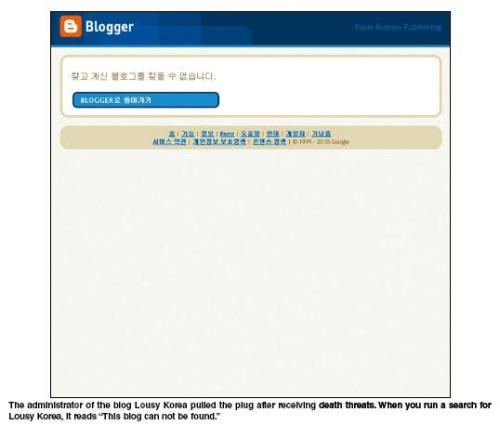 The teacher, whom we’ll call L.K. to protect her privacy, last week took her blog down completely. Threats were being made not only to L.K., but to other bloggers who were linked on her blog, and even the families of those bloggers. Lousy Korea is not the only blog that has been targeted by death threats, nor the only expat: Korean Rum Diary is another blogger who received a death threat with detailed descriptions of how he would be murdered, and included his real name and address.

Popular blogger Brian in Jeollanam-do was recently reported to immigration, most likely because of his critical opinions, and the president of the Association for Teachers of English in Korea also had his life threatened. Some of these people were attempting to discuss Korean social issues honestly. Others took negative approaches. However, it is shocking that there are people who believe that when somebody writes something they dislike, an appropriate response is to threaten that person’s job, life, friends or family.

So what’s with these negative blogs, anyway? They’re misunderstood: A lot of the people who complain online save all their negativity for the Internet, so that they can be pleasant and polite during the day to their friends and coworkers. These people are not publishing their articles in famous magazines or newspapers -- they often aren’t writing for an audience at all: They’re participating in a group therapy session, dealing with culture shock by talking to others who also feel culture shock. Posting their thoughts where anybody can find them might not be the wisest choice, but such people deserve pity more than hostility.

Meanwhile, in the same way that hyper-negative bloggers leave a bad impression of expats in Korea, the extreme reactions from netizens, who really believe they are protecting Korea with their hateful behavior, creates the impression that Korean society can’t stand criticism. This tiny, angry minority of hostile people can be very noisy, and they’ve chosen different targets at different times: ask Park Jae-beom, Vera Hohleiter (the “Loser” girl from Misuda), Dog Poop Girl or Jim Hewish. These people do not realize that rather than protect Korea’s reputation, their behavior actually damages it by creating a false image of a country full of thin-skinned, reactionary and hostile netizens.

During Park Chung-hee and Chun Doo-hwan’s dictatorships, people were afraid to say anything different, difficult, or provocative, because people were regularly jailed for criticizing the regime. Even today, the situation is similar in North Korea. It is really sad that a few angry and aggressive commenters can create a culture of fear online, so that, once again, people are afraid to express their opinions. It is shameful that even though many Koreans alive today can still remember those dictatorships, some people are celebrating Korea’s new democratic freedoms by using the same fear and intimidation tactics Korea’s old dictators did, to stifle opinions they dislike.

Free speech is the lifeblood of a truly free society, and while free speech does not mean speech without consequences, there are acceptable responses to speech, like written responses, angry comments, criticisms and negative feedback, and there are unacceptable responses, like threats to someone’s privacy, job, safety, friends or even family. It doesn’t matter if someone’s opinion or method of expression is unpopular or even offensive: If their free speech is not also protected, nobody is really free to express themselves.

These days, Korea seems to be especially concerned with how it is perceived by countries around the world. Branding is the buzzword in food, business and tourism promotion. Positive mentions of Korea are repeated, but criticisms are met with outcry.

On the blogs, it’s the same: Everybody congratulates the happy bloggers for truly understanding Korea; however, if bloggers do not feel free to say what they really think, if they are writing positive things because they fear violence when they criticize, then their positive comments are as empty as the songs of North Korean school children praising their leader, for fear of the prison camp.

To comment, e-mail mattlamers@heraldcorp.com; Rob Ouwehand’s other writings can be found at the blog Roboseyo.blogspot.com; the opinions expressed here do not necessarily represent those of The Korea Herald – Ed.